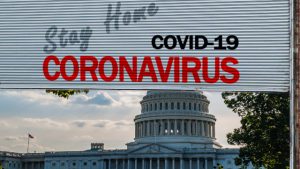 According to psychologists and other researchers who study pandemics, the main reason we’re seeing such unprecedented violence, destruction, and looting is because there’s a lot of pent-up frustration caused by coronavirus lockdowns that is now exploding outwardly, using the death of George Floyd as the sort of straw that broke the camel’s back.

Historian John Berry, who is a well known author of several books focused on the study of past pandemics, stated that he things the pandemic “aggravated things.”

Tension built up during the lockdowns due to the massive joblessness — especially for those making less than $40,000 a year, African Americans disproportionately getting sick from the virus, and people being shut in the house for months, Berry said.

“One can’t understate the role of pandemic in the protests,” said Alec MacGillis, former Baltimore Sun reporter, on Twitter. “For weeks, people have been told to stay home. They’ve had no social contact with large groups, which humans crave. Now, they can.”

“No doubt in my mind that the pandemic has eroded people’s capacity to tolerate additional frustration and anxiety,” Dr. Kenneth Eisold, a practicing psychoanalyst, told the Washington Examiner. “I also suspect that the riots reflect an unconscious protest against the lockdown.”

In other words, people were really frustrated over the lockdowns and the various bits of trouble they caused economically and otherwise, and simply couldn’t take anymore. Then along comes the death of George Floyd to sort of pushing things over the edge.

Other professionals, like Dr. Joe Pierre, health science clinical professor at UCLA, think that the coronavirus highlighted the racial and economic disparities the country and that was added pressure.

Another theory totally ignores all of that and says this violence is the product of agitators from outside groups like Antifa who came into peaceful protests and stirred things up until they got out of control.

It’s probably a combination of those factors put together. Regardless, this isn’t the first time our nation has experienced something like this. We need to love one another and seek peace when possible. We’ll get through it all. We’re America, aren’t we?