Psaki Dodges Question About Whether Or Not Biden Supports ‘Unlimited Number’ of Unaccompanied Minors Entering U.S. 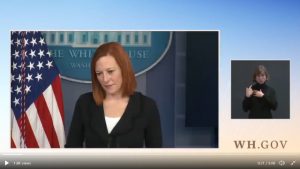 White House Press Secretary Jen Psaki has once again refused to answer questions related to whether or not Democratic President Joe Biden takes “any accountability” for the crisis happening at the southern border that is currently happening during his administration and also dodged questions concerning whether or not Biden supports an “unlimited number” of unaccompanied minors illegally entering the country.

“A lot of Americans are saying that, you know, the surges are happening under President Biden’s watch after he reversed some previous policies,” CBS reporter Weijia Jiang said to Psaki. “So does the administration take any accountability for what’s happening?”

Instead of answering the question, Psaki immediately deflected, demanding to know who the Americans were who were saying that. When Jiang highlighted that Trump was one of the people who was pointing out that the crisis is unfolding on Biden’s watch, Psaki snapped back that the Biden administration does not listen to the former president.

Fox News reporter Kristen Fisher asked Psaki if there were “any discussions” going on inside the administration about reversing the policy “of allowing all unaccompanied children in the United States.”

“None at all?” Fisher said in response. “So I guess is the plan then to take in and safely and humanely find a home for an unlimited number of unaccompanied children?”

Once again, there was a refusal to answer the question, pivoting to lecturing Americans to have more compassion on unaccompanied minors who are “overwhelming the administration’s stretched resources,” one report said.

And Psaki refuses to answer if Biden is responsible for the border crisis that he created. pic.twitter.com/kxw0n7vaCo

Well, you know, it’s pretty clear the left’s strategy for ensuring they win future elections is to get as many illegal immigrants across the border as possible, luring them here with promises of free goodies and easy citizenship, all to get them on the hook to vote Democrat, despite the fact doing so will hurt them in the long run.

These people will stop at nothing to destroy our republic. Nothing.