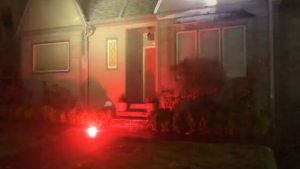 A group of left-wing protesters targeted the home of Portland City Commissioner Dan Ryan on Thursday night after he refused to vote in favor of defunding the police. The unruly crowds tossed objects at his home, breaking a window. They also shined bright lights into his house and threw burning flares and paint-filled balloons at his home.

Back in late October, the five-member city council had a meeting to get together and consider a proposal put together by Commissioner Jo Ann Hardesty to slash the Portland Police Bureau’s budget by a staggering $18 million.

The night before, protesters visited Ryan, who was sworn in September after winning an August runoff over former Multnomah County Commissioner Loretta Smith, at his North Portland home, pushing him to vote for the proposal.

But Ryan voted not to have a formal vote on Hardesty’s proposal, asserting he needed more information, delaying the vote until November 5. On Thursday, the vote was taken; the Portland City Council voted down Hardesty’s proposal. “The majority of the council called for more comprehensive discussions of how to best reform public safety in Portland and expressed concerns over the layoffs that could result from a cut of that size,” Oregon Live explained.

“After nearly six hours of testimony Wednesday evening, Ryan in effect cast the deciding vote—to not have a formal vote on Hardesty’s proposal, saying he needed more information about the impact the cuts would have on the bureau. He sided with Mayor Ted Wheeler and Commissioner Amanda Fritz in delaying a vote until Nov. 5,” Willamette Week reported.

The sheriff’s office said, “The Portland Police Bureau and Portland Fire & Rescue are actively investigating this alarming criminal activity that put an entire neighborhood at risk. This is the fourth night in the past week Commissioner Ryan has had agitators cause both vandalism and disruption to his home and neighborhood,” ABC News reported.

A mob of antifa have descended on the home of Portland city council member Dan Ryan for voting against @JoAnnPDX’s amendment to defund police. They’re attacking his home now (turn on audio). #PortlandRiots pic.twitter.com/YJoJhX3XIS

This is the new normal for radical liberals, most of which are young people who have been brainwashed by the public education system to think that this sort of violent behavior is how one goes about creating social change.

It’s not, by the way. It just makes you a criminal worthy of spending time in a federal or state prison. Just throwing that out there.