Project Veritas Posts Video On Google Bias On YouTube. Guess What Happened Next. 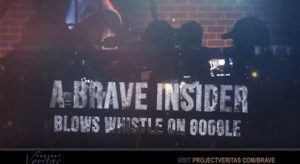 A brand spanking new video from Project Veritas that included testimony from a whistleblower, leaked documents, and undercover footage of a Google employee blabbing about how they are working hard to prevent “the next Trump situation,” has been yanked down by YouTube.

Gee, it’s almost like these folks are doing their best to interfere in future American election and nullify the voice of the people in order to get their own candidates elected to office.

On Monday, Project Veritas released its latest Big Tech report, this time focusing on ways an insider says Google manipulates what information its users access in order to promote an ideological and political agenda. In the video, the whistleblower — whose identity is protected — walks Project Veritas’ James O’Keefe through internal Google documents that he says show that the search engine is a “highly biased political machine” that manipulates searches for the purpose of promoting its “fair and equitable” priorities, filtering out or deemphasizing even factual information if its creators deem that information “unfair.” To accomplish this, the company works to prevent “algorithmic unfairness.”

The video features clips of Project Veritas undercover reporters’ secretly recorded discussion with Jen Gennai — head of Google’s “Responsible Innovation” team, which monitors the responsible implementation of A.I. technologies — in a restaurant in San Francisco. In the video, she discusses the rationale behind the company’s A.I. principles. “The reason we launched our A.I. principles is because people were not putting that line in the sand, that they were not saying what’s fair and what’s equitable so we’re like, well we are a big company, we’re going to say it,” she says, adding: “The people who voted for the current president do not agree with our definition of fairness.”

Another clip shows her discussing Google’s attempt to “prevent” another 2016. “Elizabeth Warren is saying we should break up Google,” she says. “And like, I love her but she’s very misguided, like that will not make it better it will make it worse, because all these smaller companies who don’t have the same resources that we do will be charged with preventing the next Trump situation, it’s like a small company cannot do that.”

So why did YouTube pull the video? The extreme left-wing company, who are apparently big supporters of censorship, say it was “due to a privacy claim by a third party.”

This isn’t the first time that YouTube has pulled a video from Project Veritas. Two weeks ago, the group posted a video exposing Big Tech that also managed to snag a privacy complaint. Convenient, right?

The truth of the matter is, YouTube and Big Tech do not want the average American who uses their services to know they are censoring content in an effort to suppress conservative voices in order to help Democrats win elections.

They want people ignorant and blissful, so they’ll keep pulling the lever to vote for the Democratic Party come November. It’s sickening and disgusting.

Free speech used to mean something in America. Too bad it doesn’t anymore.