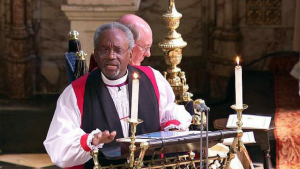 Progressives are weird. They claim to want to end divisiveness, intolerance, and hate, and yet they seem utterly unaware how often their own words fan the flames of tribalism in a nation where many on the right feel demonized and misunderstood simply for holding views that go against the politically correct status quo.

Episcopal Presiding Bishop Michael Curry is the American clergyman who became an overnight star after his sermon at the Royal Wedding. The Royal Wedding was, of course, between Prince Harry of England and American television star Megan Markle, who happens to be biracial and so, to the American left, who can’t see past the color of anyone’s skin, this was some kind of great victory for racial politics everywhere instead of just a marriage that happened to be between a British monarch and a woman with an African American mother.

“It’s like somebody woke up Jim Crow,” Curry told CNN in an interview before the Thursday evening service, “and said let’s not just segregate Americans over race, let’s separate people along religious and political and class lines, too.”
Thursday’s service, a candlelight vigil that followed at the White House and a declaration by Christian leaders are intended to dig beneath those divisions and remind Christians of Jesus’ core values, Curry said.
“To help Christian people, people of goodwill, to find their voice, to reclaim and renew the faith that Jesus has given us, and to find a way to live that faith both in our personal lives and in the public square.”
The bishop insisted his activism is non-partisan, declining to criticize President Donald Trump by name. “We are not here to point fingers,” he said before the service, “we are here to lend a helping hand.”
Likewise, the Rev. Jim Wallis, a veteran evangelical activist and key organizer of the “Reclaiming Jesus” movement behind Thursday’s event, insisted that Jesus, not Trump, was the group’s central focus.
Still Curry and the other Christian leaders at Thursday’s service are clearly unhappy with the political status quo, particularly what they see as the rise in white nationalism, sexism and political language that “debases” the “most vulnerable children of God,” including immigrants and refugees.

This is a common trend among the religious left, who take truths about Christ–His love for all humanity, particularly the impoverished and downtrodden–and conflate them with common political talking points like nations being required to take in illegal immigrants, refugees, and swapping out the First Amendment rights of Christians for the rights of “marginalized” groups.

Case and point: Curry, CNN says, “has also been a vocal backer of LGBT rights, in his own Episcopal Church and in society at large. Last October, he joined other religious leaders in filing an amicus brief with the Supreme Court opposing a Christian cake maker who refused to bake a cake for a same-sex wedding. That case will be decided later this year.”

I missed the Bible verse about forcing other Christians to ignore their personal conviction and bow down to the will of the state above the will of their Lord and Savior. I also missed that Constitutional amendment, apparently.

So leave it to a progressive liberation theologian like Curry to use such inflammatory language as “Somebody woke up Jim Crow” (he chose the right outlet to say that too, as well) to undermine the incredible strides made by a nation that was the first in history to go to war against its own people to guarantee the rights of all its citizens.

Perhaps, Bishop Curry, by dramatizing the legitimate concerns of many within the Church of Christ and America at large and reducing them to white supremacy and Jim Crow, you’re not actually solving our nation’s tribalism, you’re the one drawing lines in the sand.