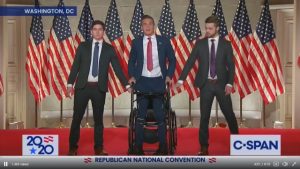 One of the most powerful moments of the evening came about when Cawthorn, who is paralyzed, stood up and recited the Pledge of Allegiance while also calling for Americans to stand with him in protecting and defending the principles that our nation was founded on.

A journalist with PBS didn’t like this too much, claiming that the move was a repudiation of folks who have knelt during the National Anthem and other such nonsense.

Social media ended up coming out of the woodwork to put the journalist back in her place.

Cawthorn standing to recite the Pledge was enough for PBS journalist Yamiche Alcindor to criticize him on Twitter, writing, “Madison Cawthorn made it a point to stand, suggesting that all Americans to (sic) should stand during the pledge of allegiance & national anthem. It was a direct rebuke of actions by ppl — including black athletes who are currently sitting out games — protesting police brutality.”

Madison Cawthorn made it a point to stand, suggesting that all Americans to should stand during the pledge of allegiance & national anthem.

It was a direct rebuke of actions by ppl — including black athletes who are currently sitting out games — protesting police brutality.

Rising to his feet, Cawthorn stated, “And be a radical for our Republic, for which I stand; one nation, under God, with liberty and justice for all.”

And here’s how the right responded to this horrible criticism:

If you thought, "certainly nobody could attack this man in a wheelchair for standing up at the end of his speech," you haven't met our completely insane White House press corps, currently viciously attacking a paralyzed man for not sharing their far-left political views. https://t.co/aDNqFg68hj

How on earth could you possibly turn the rather moving act of a FREAKIN' PARAPLEGIC rising for the national anthem into some weird BLM trip? When someone holds the door open for you, is that a rebuke of BLM too?

My patience for takes like this has reached its limit. https://t.co/p7EZPmzoj8

We can only hope that more and more folks will take Cawthorn’s call to patriotism more seriously than they have in the past. Our nation needs us all, regardless of religion, race, or anything else, to come together over the principles of liberty and defend our nation from the assault it’s under by the radical left.

If we don’t stand united, this country wil fall.