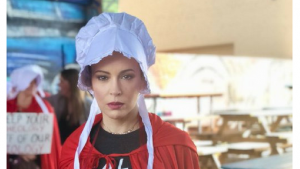 So young. So naive.

Did you not know this picture would become an instant overnight meme, one that will no doubt be galvanized in the annals of internet history?

I’m so sorry you had to learn the hard way.

Milano, an outspoken progressive Twitter-armchair-revolutionary who likes to occasionally show up at protests, showed up at a protest over the weekend for lots of virtue signaling, sky-is-falling-hysteria, and social media photo ops.

One photo, however, she may now regret.

At the event, which was some kind of “Justice Kavanaugh is literally ‘Handmaid’s Tale'” something-or-other, Milano posed dramatically in her little ‘Handmaid’s Tale’ outfit, scowling at the camera while holding a “Never Kavanaugh, Never Gilead” sign.

You think, being the big, fat progressive that she is, she may have learned from Michelle Obama’s oopsie when she held up a “Bring Back Our Girls” sign after Boko Haram kidnapped dozens of Kenyan girls and was instantly meme’d (that was also subsequently the extent to which anyone in the White House at the time tried to rescue the Kenyan girls).

Pro tip, for anyone famous: don’t hold up a sign that can easily be photoshopped and expect it to go well.

I stand with her pic.twitter.com/aFnWswzRei

Aw, poor Alyssa. Did your dramatic progressive photo op get all ruined?