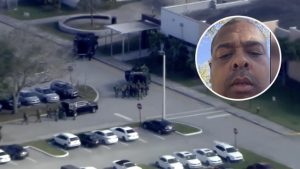 The irony here is that Simpson is a proponent of gun control laws. You know, those pesky pieces of legislation that infringe on your Second Amendment right to own a firearm and protect your life and property? This guy hearts those something fierce.

Simpson is actually employed at Marjory Stoneman Douglas High School as a science teacher and once volunteered to protect children attending school by arming himself.

What’s truly terrifying about the incident is that a homeless man found the gun before Simpson even recalled leaving it behind. Yikes.

The homeless man, who according to police had imbibed one too many nightcaps, fired the gun once, but fortunately, no one was hurt.

Speaking to authorities, Simpson stated that he put down his 9mm Glock in a bathroom stall and forgot it when he left.

Once it occurred to Simpson that he had foolishly left his gun in the stall, he returned to retrieve it. It was right about then that he heard the gun go off and spotted his weapon in the hands of the homeless man.

He then grabbed the gun away from the man’s hands.

Police arrested the homeless man and charged him with firing a weapon in public and trespassing.

Simpson was arrested and charged with failing to safely store a firearm, a second-degree misdemeanor. The science teacher could end up spending 60 days in the clink for his negligence.

Simpson was released after posting his $250 bond.