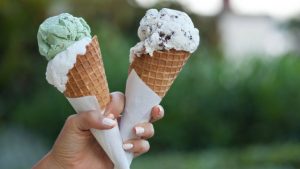 You know what I like to think of when I choose an ice cream flavor?

You know what I don’t care to think of when I’m choosing an ice cream flavor?

Seriously, even if you are in favor of abortion, does anyone really want to think about the procedure while chowing down on a tasty frozen treat?

I’m guessing no. Although to be fair, liberals are so freaked out over the possibility of another originalist justice on the Supreme Court, they probably see abortion everywhere they go, so apparently, ice cream is no different.

Western Journal has the story:

NARAL partnered with “What’s The Scoop” to create the abortion-related flavor.

What’s The Scoop ice cream shop has two locations in Portland, Oregon. “We fully believe doing ‘good’ will help us do well,” the shop wrote on its website.

The flavor will be available for consumption at a number of NARAL-sponsored ice cream socials intended to garner resistance against Judge Brett Kavanaugh’s appointment to the U.S. Supreme Court.

We’re not entirely sure how they plan to “resist” a nominated SCOTUS judge whose confirmation hearings will happen before midterm elections in a House and Senate both controlled by Republicans when he was nominated by a Republian president, but pro-aborts can dream, can’t they?

Actually, I wish they wouldn’t.

There is something beyond sick about using something as benign and universal as ice cream to promote the literal murder of children in the womb, I’m sorry.

Over time, the pro-abortion movement has gotten bolder and bolder in not simply justifying, but practically glorifying the procedure, a procedure which even the most humanist, pro-abortion physician would tell you is no small matter.

Did they really need to bring ice cream into it?