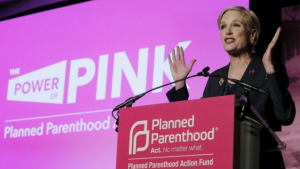 Another week, another ridiculous media outrage over something relatively insignificant that Trump did. This week, it’s his comment that MS-13 members, that is to say, members of a gang whose motto is literally “Rape, Steal, Control” who are known for their particularly violent and torturous methods of killing both gang rivals and innocent people alike…are animals.

Apparently, this is offensive to some people.

Sorry to keep repeating myself I can just barely wrap my head around how anyone at all could find that offensive. Perhaps the media might want to have a chat with some of the family members of MS-13’s victims?

So now Cecile Richards, the recently-resigned former director of Planned Parenthood, and NARAL President Ilyse Hogue are tut-tutting the president’s words, with apparently no recognition of the incredibly inconvenient fact that they support abortion.

Richards, who oversaw 3.8 million abortions in her time at Planned Parenthood, thought the President could use some “reflection”, although anyone with half a brain probably wouldn’t have to think too long and hard about whether or not “animals” is an appropriate term for violent murderers. In fact, it’s pretty appropriate for much of the staff at Planned Parenthood, if you want to be very honest.

This moment calls for the President to do serious self-reflection. https://t.co/5Y2MaQReUI

Hogue could probably also use some serious self-reflection, as she doesn’t seem to be aware just how true her words are.

We are in extremely dangerous territory and we know where this ends unless we resist with every fiber of our being. And believe me, if you think you are safe be you are not an immigrant, you could not be more wrong. https://t.co/K6mOirlr0Y

This statement seems ridiculous in light of Trump’s comments but it could easily be applied instead to abortion. Given the government is providing taxpayer-funded abortions to even underage illegal immigrants, this mass genocide of the unborn is, indeed, incredibly dangerous territory.

These women, like the left-leaning press and everyone who has become career critics of President Trump’s every word, find themselves in a very difficult position when they try to defend MS-13 members while advocating for the murder of the unborn.

“Planned Parenthood called the president ‘hateful’ for speaking out against a gang that is frequently accused of engaging in the sex trade, decapitating enemies, and committing brutal beatings and murders,” the Daily Wire’s Emily Zanotti says. “At one point, MS-13 strung several of its victims from a highway overpass — all women, presumably members of the ‘Planned Parenthood family,’ as it counts all people of a female persuasion among its supporters.”

The biggest load of crap you’ll hear from liberals like these women is that they care about the lives of anyone, let alone immigrants, who are constantly at risk of violence from MS-13 or other gangs or criminals. They’d rather virtue signal for the immigrant vote all day long than actually support anything that would save lives–in the womb or otherwise.