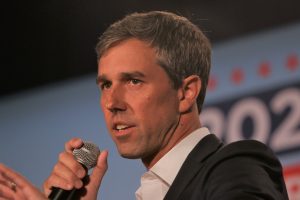 As much as the left likes to mock and malign firearms owners as though they want to see mass shootings happen and don’t care when innocent people are harmed, that’s not the case.

If they would stop and think for a minute, really think without falling back on regurgitated talking points, they’d see that our aim is simply to defend ourselves, our families, our homes, our communities, and, if necessary, our liberty.

But, sadly, mass shootings make for highly effective propaganda, they make the discussion more raw, painful, and emotional, and they help to drive the wedge between right and left even deeper. And, of course, they help folks like Beto O’Rourke whose shot at the presidency depends on feeding a culture of anti-gun hysteria.

When Dylan Klebold and Eric Harris carried out what was at the time the deadliest school shooting on April 20, 1999, at Columbine High School in Littleton, Colorado, Evan M. Todd was the first student shot in the library and the last person to speak to the shooters before they continued on their rampage through the school and ultimately turned their weapons on themselves.

Now, 20 years later, Todd found himself in Aurora, CO among several others gathered to hear O’Rourke give a town hall speech on Thursday.

After sitting through O’Rourke’s repeated calls for mass gun confiscation, Todd got a chance to ask the presidential hopeful a loaded question.

“Don’t you think it’s time we get rid of all semi-auto firearms?” Todd asked, causing a few folks in the crowd to clap and cheer.

It’s funny that Todd should be there, given the eerily reminiscent words out of Beto that we heard during the first round of gun bans to follow the Columbine massacre, especially that such weapons aren’t needed to hunt and that civilians should not have access to anything even remotely resembling military firepower.

Here’s the twist, in case you’re unaware as I was: Evan Todd is a staunch supporter of the Second Amendment.

It turns out that Jeffrey Cook, ABC’s presidential campaign reporter, was unaware as well:

And there was this emotional moment. A Columbine survivor, Evan Todd, asked Beto to include all semi-automatic weapons in his proposed ban.

"I was the first student that was shot in the library. And I was the last one to talk to the two murderers before they committed suicide." pic.twitter.com/wygPs1pn5h

While O’Rourke’s answer was murky, he insisted that he would only ban guns that were “designed to kill people.”

To clear up confusion from the media that seemed eager to report on the “emotional moment” he had with O’Rourke, Evan rather readily revealed his motive for asking such a question:

I wanted a clear answer from Beto of where he draws the line, but never got one. To answer my own question on if we should ban guns, the answer is: HELL NO! As far as my stance on guns? The Second Amendment supports me. https://t.co/2W0fPzn0aD

As it turns out, Todd is the communications director for Bullets Both Ways, an organization that advocates for increased defense in schools and churches through the training of armed teachers staff, according to The Daily Caller.

When I listen back on Beto’s remarks a second time, he clearly states his intentions and that is a ban on everything. https://t.co/e9YFe8rZl6

Todd wasn’t the only town hall attendee critical of Beto.

According to the Denver Post, Lauren Boebert of Rifle, Colorado owns a restaurant called Shooters Grill, where the wait staff are all armed on the job, making it perhaps the safest damn eatery on the planet. Boebert, 32, traveled three hours to Aurora to press O’Rourke for an explanation as to how he intends to “legislate the hearts of men” and leave Americans “defenseless.”