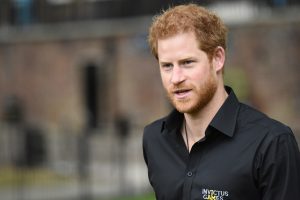 So, “climate anxiety” is a thing now.

Unfortunately, it’s not powerful enough to literally keep alarmists paralyzed in bed under their Snuggies and watching Netflix. Think of everything we could accomplish!

But, alas, climate anxiety is a social contagion, and its victims, like Greta Thunberg and Prince Harry, to name a few, are motivated to spread the doom and gloom far and wide—even if they must take carbon-spewing jets to do so.

Listen, I could give a flying spatula about how these people choose to get from point A to point B, but the hypocrisy of these doom-and-gloom elitists wholly deserves to be mocked.

“Harry said that he often woke up and felt overwhelmed by too many problems in the world and that sometimes it’s hard to get out of bed in the mornings because of all the issues, but he wanted to use their platform to enable grass-roots change and to try and create a better society,” South African student Peter Oki, 18, said in an interview with the Daily Telegraph.

Oki attended a “multi-faith service” with Harry and his wife Meghan on their royal tour of southern Africa.

Earlier in September, however, The Daily Beast highlighted the apparent hypocrisy of the royal couple, who frequently make use of dire, alarming language in describing climate change even while they jet-set all over the world.

“I came here by commercial. I spend 99 percent of my life traveling the world by commercial. Occasionally there needs to be an opportunity based on a unique circumstance to ensure that my family are safe,” Harry said, defending his family’s admittedly imperfect travel habits.

“We could all do better,” he continued. “While no one is perfect, we all have a responsibility for our own individual impact. The question is what we do to balance it out.”

“Sometimes the scale of the conservation crisis feels overwhelming and that individual actions can’t make a difference. I’ve certainly felt that, but I’ve learned that we cannot dismiss the idea of trying to do something, just because we can’t do everything,” he added.

“Meghan had taken four private jets in the space of 11 days to cruise between London, a super-premium villa in Ibiza, and Elton John’s fabulous home in the south of France,” noted The Daily Beast, adding that Harry “fretted about global warming and pledged to only have two children for environmental reasons” during a Vogue interview “just days before news of the private flights leaked.”

Back in July, Harry’s father, Prince Charles, declared that humanity has about 18 months to act on climate change, whatever that even means, before irreparable damage is done.

“Ladies and gentlemen, I am firmly of the view that the next 18 months will decide our ability to keep climate change to survivable levels and to restore nature to the equilibrium we need for our survival,” he said, according to the Daily Telegraph.

Gee, I wonder where the anxiety is coming from.