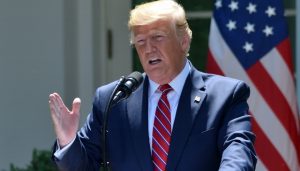 President Trump has now revealed a brand spanking new kind of test for coronavirus that will deliver results in five minutes, which is lightning fast speed in comparison to the tests currently being used which could take up to a week.

The test was developed by Abbott Laboratories and the kit will be made available in doctor’s offices, emergency rooms and drive-through testing sites within the next month according to Food and Drug Administration Commissioner Dr. Stephen Hahn.

Hahn spoke briefly during Trump’s coronavirus task force briefing in the Rose Garden on Monday saying, “Just like tests for flu or strep where you go to the doctor’s office so you can get a test done, you can get an answer within minutes of having this test done.”

The test cartridge developed by the company will fit into their ID NOW devices, which are being used at hospitals, doctor’s offices, and smaller clinics around the country. The company plans on launching the tests at select health-care facilities who offer urgent care, sometime within the next week.

Current tests for COVID-19 take up to a week to deliver results. But since the outbreak in the U.S., researchers have been working double time to produce a quicker test. Hahn said the new test would usually take 12 months to go through all the hoops and hit the market, but with support from the Food and Drug Administration (FDA), the test was approved in weeks.

“The numbers have been incredible on testing but in the days ahead we’re going to go even faster,” Trump told reporters.

The Trump administration, along with the Department of Health and Human Services, have also announced that over 1 million people have now been tested for coronavirus, which the president said is a “milestone in our war against the coronavirus.”