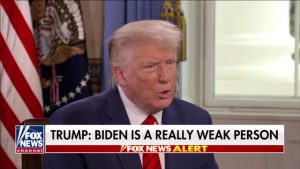 President Donald Trump sat down Monday evening with Laura Ingraham on Fox News and stated that, after a supporter of his was murdered by Antifa over the weekend, he wants his supporters to avoid left-wing extremists and let law enforcement handle the situation.

The president is clearly a man who cares for those who back his administration and understands their frustration. However, he’s a good leader who wants to preserve the safety of good, hard working Americans who are fed up with the current climate in this country.

“But do you want your supporters to confront the left-wing protesters or do you want to leave it to law enforcement?” Ingraham asked.

“No. No. No,” Trump responded. “I want to leave it to law enforcement.”

When asked again if he wanted his supporters showing up to confront the far-left extremists, Trump responded, “No, I don’t.”

Trump is right on the money.

Our political climate in this country has reached dangerous levels, thanks in large part to the failure of Democratic leadership in taking proper measures to quell violent riots that have exploded across the nation.

This has created an atmosphere where miscreants roam the streets, emboldened they will face no consequences for their actions.

Here’s to hoping things get straightened out sooner rather than later.