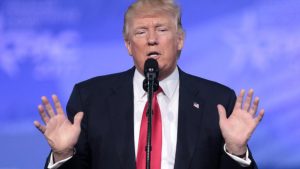 President Donald Trump spoke with the folks at “Fox & Friends” by phone on Monday where he once again let his feelings about universal mail-in voting be made known, stating that if we allow this to happen, “we’re never going to have a fair” presidential election.

He, of course, is right on the money. Mail-in voting is fraught with all kinds of potential disasters and problems that will no doubt compromise the integrity of our election system, and quite frankly, it’s already been compromised enough.

“I have to tell you, that if you go with this universal mail-in … tens of millions of ballots being sent to everybody and their dogs, dogs are getting them, OK? People that have been dead for 25 years are getting them, you have to see what’s happening. Then you’re never going to have a fair election,” Trump said.

While fewer than 10 states currently have universal mail-in voting, where ballots are mailed to every registered voter, Democrats are pushing for wider use of the practice, which has prompted the current battle over the U.S. Postal Service (USPS). House Speaker Nancy Pelosi (D-CA) is calling lawmakers back into session next week to hold hearings on the USPS.

The president went on to say that he’s currently working on measures to help repair what he referred to as the long-term “disaster” of the USPS’s finances.

“This isn’t a Trump thing. This has been one of the disasters of the world, the way it’s been run,” Trump said. “What am I supposed to do, let it continue to be run badly?”

Of course, Democrats are stating that the measures Trump is taking to fix the USPS is him putting some sort of master plan into effect to prevent the usage of mail-in voting this November.

All of this talk of mail-in voting comes from the politicization of the coronavirus that continues to be pushed hardcore by the radical left in our country.

These folks are desperate to win the election, to ensure that Trump does not sit in the White House for another four years. If that means rigging the game so to speak by doing mail-in voting, well, they’re more than ready to walk down that road.

If we truly want to protect the right of every American to be able to vote and have a voice in who and how this nation is governed, we must not go to universal mail-in voting.