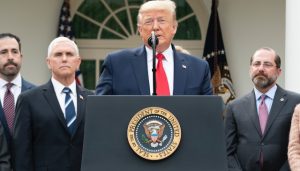 President Trump conducted an interview on Monday with “Fox & Friends,” where he stated that his list of potential replacements for Justice Ruth Bader Ginsburg has now been whittled down to 5 people, promising his choice would be revealed either Friday or Saturday.

The president went on to say that the final Senate vote for his pick should be taken “before the election” and “should go very quickly.”

Ginsburg, 87, passed away on Friday because of complications concerning metatastic pancreatic cancer.

“The bottom line is we won the election, we have an obligation to do what’s right and act as quickly as possible,” Trump said.

The president said that he will make his announcement at the end of the week, following services for the late Supreme Court justice.

“I think it will be on Friday or Saturday and we want to pay respect, it looks like we will have services on Thursday or Friday, as I understand it, and I think we should, with all due respect for Justice Ginsburg, wait for services to be over,” the president said.

There’s a lot at stake with this particular court nominee. One of the biggest issues of course is abortion. With a staunchly pro-life, conservative appointment to the Supreme Court, we could finally see Roe v. Wade overturned, which would make abortion a state issue.

It would be much easier for conservative pro-life groups to influence states to ban abortion than it is to do so at the federal level.

But that’s not the only issue. Our Second Amendment rights are also in danger, along with religious liberty, if another liberal nominee is appointed to the bench.

Here’s to hoping Trump and Republicans in Congress are able to get this done.