President Trump Puts Speaker Pelosi On Full Blast Over Her Critique Of His Coronavirus Response: ‘She’s A Sick Puppy’ 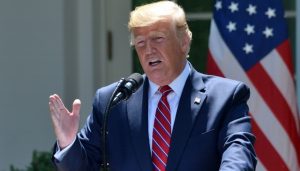 President Trump, the world’s most notorious counterpuncher has struck once again, taking Speaker of the House Nancy Pelosi to task over comments she’s made claiming that the White House screwed up in their response to the coronavirus.

Of course, as we all well know, the left has turned this into political games instead of focusing on helping the American people and working together with those who hold differing views than her own to bring this virus down.

It’s that whole “never let a crisis go to waste” mentality the left has become known for.

“As the president fiddles, people are dying,” Pelosi said Sunday on CNN’s “State of the Union.”

The thing that Pelosi doesn’t seem to be taking into consideration at all is that there could potentially be loss of life by shutting everything down too. If we continue to shut everything down without even having an achievable goal of when we could open the country back up and get back to life as normal, we run the risk of ruining the financial standing of millions and millions of people, making the cure worse than the disease.

We all want to preserve life as much as possible. That’s a no-brainer. However, what are we going to do if we destroy our entire society in the process? How much of a price can we afford to pay before what we are doing does so much damage to the economy that we can’t bounce back from it?

Already people are shutting down their businesses, and not just for quarantine purposes, but actually shutting down permanently, as in “going out of business.” This is a concern for us all, just as much as the coronavirus mortality rate, thus to love our neighbor means to look out for the weak and vulnerable and those suffering economically, not just one or the other.

Trump spoke by phone with the hosts of “Fox & Friends” on Monday where he called Pelosi a “sick puppy” for her comments.

“She’s got a lot of problems and that’s a horrible thing to say,” Trump stated during the interview. “I stopped some very, very infected, very, very sick people, thousands coming in from China, long earlier than anybody thought, including the experts, nobody thought we should do it except me.”

Trump went on to claim that Pelosi is still locked into playing the “impeachment game.”

“There’s something wrong with the woman,” he continued. “She focused on impeachment, and she lost, and she looked like a fool.”

The problem with this whole situation is that politicians don’t actually care about the people they serve. Instead, they use us all as pawns in their games to gain power and wealth for themselves without having to actually produce any sort of real advancements for our society.

Coronavirus is a big deal. It requires creative thinking to deal with it properly and that means folks on both sides need to set aside agendas and work toward doing what’s best for our country. Neither overreacting or downplaying this illness is the road to take.