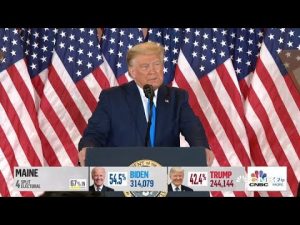 President Trump held a surprise briefing today in order to come out and share the good news about the Dow Jones Industrial Average hitting a stupendously awesome record high and to share his thoughts on new vaccine developments.

Given how much upheaval we’ve experienced in the last few weeks, we could all use a little good news.

“The stock market’s just broken 30,000. … That’s a sacred number, 30,000. Nobody thought they’d ever see it,” Trump said to reporters attending the briefing. The president also stated he was “thrilled” with “what’s happened on the vaccine front.”

Trump praised “all the people within the administration that worked so hard,” adding, “I just want to congratulate the people of our country.”

The president spoke for about one minute and took no questions from reporters before exiting the room. He was joined by Vice President Mike Pence, who did not speak.

During the presidential campaign, Trump predicted a stock market crash if Joe Biden won. The transition to a Biden presidency began Monday with a letter from the administrator of the Government Services Administration.

The president has not taken questions from the media since November 3rd.

It’s nice to see that the experts were once again wrong about some sort of gloom and doom they predicted for our country. It seems everyone these days is so negative, always looking for something to be worried or scared about.

Thankfully, things didn’t go like they said they would. Now if only we could be ensured of a second term for Trump. That would make this a really good week.