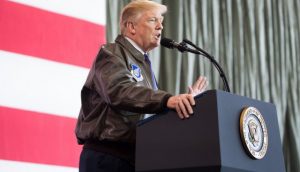 President Donald Trump made a public appearance for the first time since the presidential election was called for Joe Biden by many outlets in the mainstream media, to take part in a Veteran’s Day remembrance ceremony held at Arlington National Cemetery Wednesday.

Trump was joined by Vice President Mike Pence, who bowed his head in prayer and presented a wreath at the nation’s monument to those who died in war.

Trump has made no public comments since media organizations projected that presumptive President-elect Biden had amassed the 270 electoral votes needed to win. Instead, he has been holed up, meeting with advisers and firing off angry tweets alleging — without evidence — that he was the victim of fraud in battleground states.

He emerged on a wet Wednesday morning to take part in the remembrance rite, saluting a wreath laid before the Tomb of the Unknown Soldier as dignitaries, including first lady Melania Trump, looked on from beneath umbrellas.

He made no public comments, in keeping with convention and the somber tone of the occasion.

The president has made it clear he cares deeply for our military, so it’s not at all surprising to see him come out and stick with convention at this very somber event.

Be sure to take an opportunity to thank the veteran’s in your life and those you come across for opting to serve our country and give so much of their lives to us in order to protect our liberty and way of life.