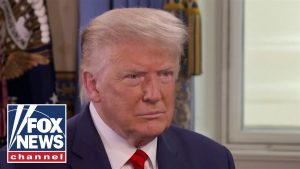 President Donald Trump announced Friday that a peace deal has been reached that will normalize ties between the nation of Israel and Sudan. But that’s not all. The president said that there would “be many more peace deals to come in the Middle East.”

Democrats have said for a long, long time that peace in the Middle East is a pipe dream, that it’s impossible. But yet, here we are, watching President Trump come up with deals that are actually helping to stabilize the most contentious region in the world. His foreign policy is simply amazing.

Trump invited reporters into the Oval Office while he was on the phone with the leaders of Israel and Sudan to discuss the latest U.S.-brokered deal in the run-up to Election Day.

Trump said Sudan had demonstrated a commitment to battling terrorism. “This is one of the great days in the history of Sudan,” Trump said, adding that Israel and Sudan have been in a state of war for decades.

“It is a new world,” Netanyahu stated via the phone. “We are cooperating with everyone. Building a better future for all of us.”

Trump then went on to say there are five other countries that wanted peace with Israel. “We have many lined up. They want to come in, get the deal done.”

The president went so far as to say that some day, even Iran would want to normalize relations with Israel.

“Iran ultimately will become a member of this whole thing. Look, someday I’d love to help Iran get back on track. They’ve gone from a rich country to a poor country in three years,” the president stated.

Hey, at this point, I’d say anything is possible. And if anyone can make it happen, it’s Trump.