Presence Of National Guard Troops In D.C. Costing A Half A Billion Dollars 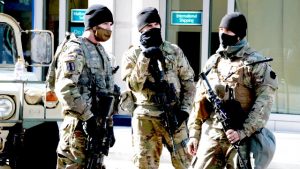 The presence of National Guard troops in the nation’s capital is costing quite a pretty penny, somewhere around $500 million, as more threats allegedly pour in, requiring soldiers to remain where they are until early spring.

Bloomberg actually took a stab at estimating the cost of the troops earlier in the week. They were wrong. Their estimate was $480 million. Twenty million is a pretty big difference when you realize how many zeroes that is.

Approximately 26,000 guardsmen from all 50 states, as well as three U.S. territories and the District of Columbia, descended on the capital in the wake of the unrest on Jan. 6, locking down the sensitive areas around the Capitol building, National Mall, and large portions of downtown with police barricades and razor-topped fences.

Troop numbers have decreased to around 7,000 since the inauguration of President Joe Biden, with about 5,000 planning to remain until at least mid-March, in accordance with a Department of Homeland Security bulletin that warns threats remain even after the inauguration.

“Information suggests that some ideologically-motivated violent extremists with objections to the exercise of governmental authority and the presidential transition, as well as other perceived grievances fueled by false narratives, could continue to mobilize to incite or commit violence,” the bulletin said.

So what are the events and dates that have so many people scared out of their wits about possible trouble is the beginning of Trump’s second impeachment trial which starts on Feb. 9 and the original Inauguration Day on March 4th, which some conspiracy theory folk think will be the day Trump will once again be sworn in as president.

Seems to me the Democrats are doing their best to turn D.C. into some sort of military base instead of a city that is supposed to represent our country on the national and international stage.