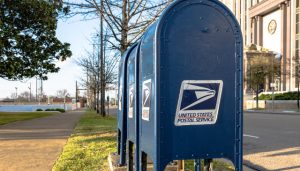 The Department of Justice announced on Wednesday that a mail carrier for the U.S. Postal Service in the state of New Jersey was arrested for allegedly dumping mail, which happened to include 99 general election ballots.

And Democrats wonder why conservatives are so against mail-in voting? Really? Well, to make it even more clear, it’s because of stuff like this and other voter fraud schemes. In-person voting is the way to go.

“Nicholas Beauchene, 26, of Kearny, New Jersey, is charged by complaint with one count of delay, secretion, or detention of mail and one count of obstruction of mail,” the DOJ said in a statement. “Approximately 1,875 pieces of mail – including 627 pieces of first class, 873 pieces of standard class, two pieces of certified mail, 99 general election ballots destined for residents in West Orange, and 276 campaign flyers from local candidates for West Orange Town Council and Board of Education – were recovered from dumpsters in North Arlington and West Orange on Oct. 2, 2020, and Oct. 5, 2020.”

The statement noted that the mail had been scheduled to be delivered on September 28, October 1, and October 2 to Orange and West Orange residents.

“The recovered mail was placed back into the mail stream for delivery to its intended recipients. Copies of the recovered mail were made and retained as evidence,” the statement added. “U.S. Attorney Carpenito credited special agents of the USPS-Office of Inspector General, under the direction of Special Agent in Charge Matthew Modafferi, Northeast Area Field Office, with the investigation leading to today’s arrest.”

Beauchene is due to make an appearance in federal court on Wednesday afternoon before U.S. Magistrate Judge Cathy L. Waldor. The statement said that if Beauchene is convicted, he could end up spending up to five years in prison and be slapped with a $250,000 fine for obstruction of mail.

Pretty serious stuff. He definitely deserves to be held accountable for his actions. Perhaps they can make an example of him and prevent other mail carriers from following in his footsteps?