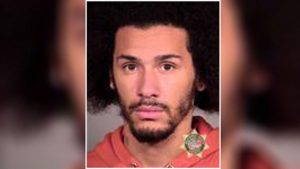 Portland police have now arrested a 25-year-old man accused in the vicious beating of a truck driver who was seen on video being violently assaulted.

The suspect, Marquise Lee Love, surrendered himself to police and has been booked in the Multnomah County Detention Center on Friday, sometime shortly after 8:30 a.m. He has been charged with assault, coercion and rioting. All three charges are felonies.

Police later confirmed the arrest in a press release shared on Twitter.

“I am pleased the suspect in this case turned himself in and appreciate all of the efforts to facilitate this safe resolution,” said PPB Chief Chuck Lovell. “Thank you to all of the members of the public who have provided information and tips to our investigators. Your assistance is very much appreciated.”

Love, who also goes by the name “Keese Love,” appears to have been captured on video repeatedly punching and kicking a man who was later identified in reports as being Adam Haner.

In an interview recently conducted with local news affiliate FOX 12 Oregon, Haner stated that after crashing his vehicle, a person was “yanking” him out of the truck”before I even got my door open.”

“I was just standing for myself as a citizen,” Haner said.”And if you can’t do that on a street, then what can you do?”

Scary times we are living in, folks.

Hopefully, this guy is put in prison and learns his lesson.