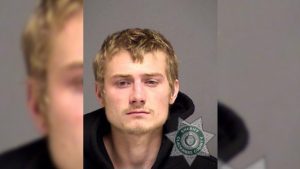 An attempted murder suspect from the city of Portland who was accused of trying to murder a police officer with a stolen pickup truck somehow managed to escape from his cell is still on the loose two days latter.

The suspect, 24-year-old David Dahlen, was first arrested on Saturday by officers from the East Precinct. He was brought into custody at 1:30 p.m. after enduring a brief pursuit on foot in the area of Southeast 101st Avenue and Southeast Insley Street. Dahlen was then transported to the Detective Dividion located in the Justice Center for an interview.

“At 5:30p.m., detectives discovered that Dahlen had escaped the secure holding cell he was in. The building was immediately locked down and additional resources were called in,” the Portland Police Bureau said in a press release. “It was later confirmed that Dahlen had gotten out of the building and was last seen running north.”

An investigation will be carried out to determine how Dahlen escaped the holding cell.

“Dahlen has not been taken back into custody and we are continuing our search for him,” police spokesman Officer Derek Carmon said in a statement to Fox News Monday. “We are looking into how he escaped and what changes are needed moving forward to prevent it from happening in the future.”

The police bureau released a statement on Saturday informing folks that “there is no reason to believe that he presents a direct threat to the community. However, PPB is asking for the public’s help to locate him.”

It’s not surprising that someone in the city of Portland would try to kill a police officer. There’s been so much unrest in the city ever since the death of George Floyd, and anti-cop sentiment, I’m surprised this hasn’t happened sooner.

Is Dahlen a part of the Antifa movement? Who knows? But let’s hope that the police are able to apprehend him before he is able to assault any more officers.