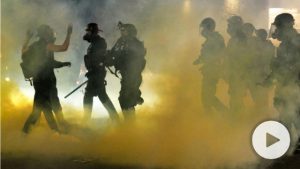 So it seems the spirit of the Seattle protesters has spread all the way over to Portland as demonstrators there have attempted to build an “autonomous zone” of their own in the downtown area of the city. Hey, it was only a matter of time before copycats popped up, right?

Demonstrators tried to set up shop in Portland’s Lownsdale Square, which is located across the street from Pioneer Courthouse. Homeland Security called in federal officers two weeks ago to try and protect this particular facility from the crazed mob of protesters that have been wreaking havoc in the area for some time now.

An unofficial Twitter page attributed to a group of anti-capitalist, anti-fascist teens who call themselves the Pacific Northwest Youth Liberation Front said protesters want to establish the Chinook Land Autonomous Territory, or CLAT, in downtown Portland. The Chinook people include several indigenous groups native to the Pacific Northwest.

Barricade at the Chinook Land Autonomous Territory (#CLAT).
People are needed here ALL night long, especially in the early morning! Get on over rn! Bring some tents. pic.twitter.com/cP5cG77m9m

“People are needed here ALL night long, especially in the early morning! Get on over rn! Bring some tents,” the Twitter page said, sharing an image of a barricade that read “ACAB,” an acronym meaning “All Cops Are Bastards,” and “Black Trans Lives Matter.”

The Portland Police Department said in a statement early Wednesday that a “couple hundred demonstrators gathered at Revolution Hall in Southeast Portland and marched all throughout downtown Portland before ending their march at Pioneer Square” Tuesday evening.

Police stated later on that some of the protesters made their way over to the Justice Center sometime after 9 p.m. and did what these people always do, which is block off traffic by standing in the middle of the road. Which, you know, is always such a great idea. What could possibly go wrong?

Anyway, these folks then started building barricades using — get this — “industrial kitchen appliances, road blockades, and flashing traffic signs.” Oh and fires. Lots of fires. Protesters are a bunch of pyromaniacs apparently.

Around 1 a.m., demonstrators “in an organized effort” left the barricades and walked to the Central Precinct “in an attempt to disrupt officers as they walked in from the end of their shift,” the police statement said. At that time, officers removed some of the barricades at Southwest 3rd Avenue and Southwest Salmon Street. But demonstrators then began returning to the area and “officers disengaged.”

The demonstrators also threw glass bottles at police and pointed lasers at them before setting more fires. A little bit after that they tried to rebuild the barricades.

According to police no crowd control munitions, gas, or force was used during the ordeal.