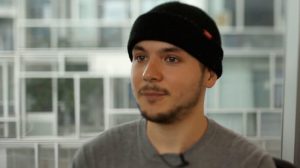 Popular podcaster Tim Pool was apparently raided by police officers while he was on the air Thursday in what turned out to be a “swatting” incident.

Officers ended up raiding Pool’s home while he was conducting a live taping of his podcast after an anonymous source reported that people had been shot and killed at the podcast host’s residence located in Maryland.

Several law enforcement officers responded to the home to investigate the incident, which is defined by Washington County Sheriff’s Office officials as “a false 911 call reporting a serious incident to elicit a significant response from police and other emergency services.”

“Someone called Police and said they shot and killed two people and were going to kill more,” the podcast host tweeted out on Thursday evening. “Police were told not to enter without a warrant but said they didn’t need one due to exigent circumstances.”

Pool’s co-host Lydia Smith received a text message claiming the household had been raided during the Thursday broadcast of Timcast IRL. Smith’s comments were followed by an officer passing briefly in front of the camera. Pool stepped out of camera view to speak to an officer while his hosts discussed the dangers and risks involved with such raids, according to the video.

Pool later returned to the camera to confirm the raid, saying two officers had entered the house to search the premises. The officers were polite and merely worked to confirm it was a swatting attempt, the podcaster said.

When Pool demanded the officers return with a warrant, they told him they could enter the property without one because of the possible threat.

Brandon Tatum, a former police officer guest-hosting that day, confirmed it was typical procedure, explaining the officers were justified to ensure no crime had been committed.

If it wasn't for our CTO going outside and calming things down it would have been bad pic.twitter.com/0P8RJzYPD1

Pool then later tweeted out a screenshot that purportedly shows several police officers outside of his home. The chief technological officer of the program then approached the police and calmed them down before any sort of violent action took place, Pool stated.

The podcaster has promised to post up footage of the incident on Frida.

“The Washington County Sheriff’s Office confirmed the incident in a press release, saying deputies were dispatched to Pool’s property at approximately 8:15 p.m. ‘for the report of two people having been shot and the suspect threatening suicide.’ A member of the Maryland State Police who arrived at the scene informed the deputies it could be a swatting incident while they were en route,” the report said.

The deputies who responded to the call noted they had exigent circumstances and stated they were “going to check and address and confirm the safety of the occupants,” the sheriff’s office went on to say.

“A check was conducted, and it was verified that no one was hurt or threatening suicide. Upon completion of the check of the address, Deputies exited the property,” the statement added.

The sheriff’s office then stated that they take swatting incidents very seriously and are now conducting an investigation to find the individuals who are responsible for what happened.