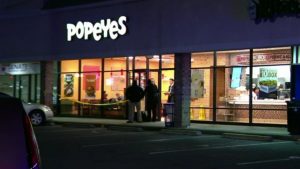 The zombie apocalypse has come, and it wants chicken.

After unexpectedly failing to meet customer demand, Popeye’s chicken sandwich is back with a vengeance. Apparently they didn’t cause enough damn mayhem the first time.

A Maryland man really was murdered on Monday night after “methodically” cutting to the front of the line of customers at a Popeye’s restaurant in Prince George’s County.

Prince George’s County Police Chief Hank Stawinski told reporters at the scene that 28-year-old Kevin Davis entered the restaurant in Oxon Hill and started “methodically” cutting a line reserved for the long-awaited chicken sandwich. When he got to the front of the line, Davis was confronted by the man who would ultimately take his life.

“Over the course of fifteen minutes this individual works his way methodically ahead of everybody else in that line, is confronted by this individual and then from the moment of that confrontation, 15 seconds later, the two of them are out in front of the store, a stabbing occurs and an individual’s life is lost,” Stawinski said.

He added, “The question my detectives have to answer is: how does a confrontation lead to a homicide in 15 seconds?”

Prelim: Around 7:00pm, officers responded to 6200 block of Livingston Road for a fight call. Once on scene, they discovered an adult male in the parking lot suffering from stab wounds. The male was transported to a local hospital where he succumbed to his injuries.

The motive for Davis’ murder was not apparent to police right away, but early reports soon revealed that the dude was in fact murdered over a chicken sandwich:

We’re here on scene. The chicken sandwich ad is right in the window. It came back Sunday and sources tell us a fight over someone cutting in line led to a stabbing death tonight in Oxon Hill MD. pic.twitter.com/9LRMRUNOpZ

Police are now asking for help in identifying and locating the man who felt as though a fast food chicken sandwich was worth more than another human life:

“What bothers me about this … is that there are families and children in this restaurant as this is unfolding and they’ve been exposed to this now as well,” Stawinski said of the incident. “This is pointless, this is disrespectful.”

This criminally stupid incident, sadly, isn’t the only case of chicken-induced mania to hit this week.

Another casualty in the chicken sandwich zombie apocalypse is an early 2000s Mercedes Benz that met its demise on Tuesday when its owner attempted to cut in the drive-through line at a Popeye’s in LA.

This absolute moron was attempting to squeeze her car between a concrete guidepost and another car and didn’t even stop moving forward as the side of her car was crunched by the post. She even backed up and tried again, ripping off some of the car’s trim and probably sealing the deal on her passenger door ever opening again.

And to top it all off, The Daily Wire reports, she was not allowed to place an order once she finally got into the line. Someone cue the violin.

This is to say nothing of the scuffles and fistfights breaking out over these ridiculous sandwiches.

What is happening in the world when this is how we act over a sandwich?