Poor Horse: Swears he’s not a racist. Wrong name and wrong color puts him on the hit list! 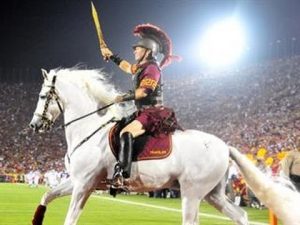 DailyWire.com tells us students at the University of Southern California are joining in the national crusade against Confederate monuments by targeting an icon close to home: the poor horse forced to carry the USC Trojan mascot around the field during football games.

According to the Los Angeles Times, the school’s Black Student Assembly has raised objections to the animal, who, by all accounts, does not hold any political opinions of his own, but who shares his name — Traveler — with the horse Robert E. Lee rode into battle in the Civil War.

Robert E. Lee’s horse was named “Traveller” (two Ls). It’s not clear whether the two names are related. Richard Saukko, the man who donated the first Traveler to USC half a century ago has long since died, and his widow claims that that horse was already named Traveler when her late husband bought him for $500 from a movie studio.

The school is now on their ninth horse mascot, Traveler IX.

But connections and logic aren’t at play here, and as soon as the similarity came to light, poor Traveler became the top target of a rally held on campus this week, in solidarity with the anti-fascists who protested a white supremacist rally last weekend.

Fortunately for the horse, he’s not likely to lose his job. Although the Assembly referred to the horse by name during their demonstration, they haven’t made any follow up calls to have him booted from the school’s sporting events. And the widow of the man who donated the original Traveler to USC says she thinks the objection is just silly.

“The problem is this: maybe three weeks ago it was fine,” Pat Saukko DeBernardi said. “So now the flavor of the day is … we all have to be in hysteria. … It’s more of a political issue. The horse isn’t political and neither am I.”