POOR HILLARY: Clinton’s Popularity Continues to Drop as She Refuses Stop Talking About the Election 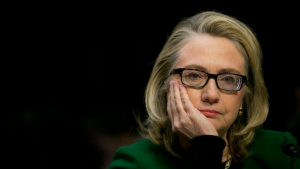 Oh, Hillary, will you ever understand why you lost?

“Only 27 percent of those polled had a very or somewhat positive view of the former secretary of state,” Fox reports, “according to The Wall Street Journal/NBC News poll. That makes her less popular than President Trump, whose popularity registered at 35 percent. It is a new low for her in the poll, which clocked her popularity at 30 percent in August 2017.”

“A Journal analysis of the poll notes that the poll is a reminder of ‘just how unusual’ Clinton is in terms of her unpopularity — even among recent losing presidential nominees who have typically experienced a post-election decline, but not to the extent Clinton has. At the time of the election, 40 percent had a positive view of her,” they add.

It has often been said that Clinton is the least popular presidential hopeful in history, but she is certainly not among those who credit her stunning 2016 loss to her lack of appeal as a candidate.

Here is a (very, very) brief recap of everything she has blamed for her loss other than her inability to relate to humans or appear to be remotely likable:

Again, this is just a very brief list, and while she’s certainly found many, many, many people to blame other than herself for her election loss, she is, by her own confession, still trying to understand what happened. Perhaps a question mark would have been appropriate to add to the title of her book, What Happened.

To add to her self-professed confusion and brilliant skill for deflection, Hillary just keeps getting invited to speak, which isn’t helping…at all. Even her own party has asked her to please just “ride off into the sunset.”

Her speaking engagements have given her an opportunity to make absurdly sexist and racist comments about why white women didn’t vote for her, to continue to bash the Americans who disagreed with her identity politics, and to lie her ever-loving rear off.

Unfortunately for Hillary, her unpopularity might not be all she has to worry about–her emails are getting a fresh probe this week, and as Washington seems to have finally mustered up the gusto to start criminally investigating her and her cronies, if there’s any justice in the world, she’ll soon be pondering her 2016 loss behind bars!