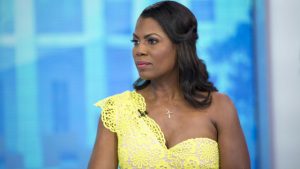 The mainstream media and Omarosa Manigault are a match made in heaven.

Unfortunately for both of them, however, it appears the beauty of this relationship doesn’t extend much further than the glory of brilliantly sensationalist lower thirds on prime time cable news.

Former White House aide Omarosa Manigault Newman’s recent efforts to insinuate that a tape may exist of President Donald Trump saying the n-word does not appear to be hurting his support among African Americans, which has been on an upward trend for months.

Manigault Newman released a audio recording this week of Trump campaign advisers discussing in October 2016 how they would respond if the rumored tape were released, CBS News reported.

Trump denied such a tape exists tweeting on Monday, “[Mark Burnett] called to say that there are NO TAPES of the Apprentice where I used such a terrible and disgusting word as attributed by Wacky and Deranged Omarosa….”

His support is up nearly 20 percent from this same time period last year.

The media and their sources have slowly become the boy who cried n-word.

Voters are clearly no longer swayed by the relentless cries of “racism” against the administration, which one imagines has more to do with an overall lack of trust in the media as well as improved job numbers and historically low unemployment numbers.

One of Trump’s greatest achievements has definitely been the massive hole he’s poked in the identity politic narrative, and, no matter how much the media tries to double-down on said narrative, it’s slowly blowing up in their faces.