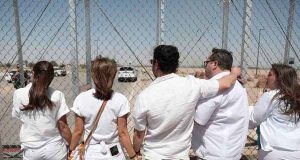 Well, folks, if any of y’all still had well-meaning delusions that PolitiFact is the unbiased, politically-neutral beacon of truth and factuality it purports to be, I’m gonna go ahead and fix that right now.

As previously reported, a photo of Rep. Alexandria Ocasio-Cortez crying outside what appears to be an empty parking lot went viral when evidence arose that the whole scene was staged.

At the time, we at Political Cowboy reported:

These photos, taken just days before she won the Democratic primary, show our bold, fearless AOC crumbling in shock and sobbing at the sight of hundreds of migrant children being held captive at the border in atrocious conditions.

Well, not exactly. They do show AOC looking like she’s trying to remember the Pythagorean theorem and crying at a fence.

I’ll never forget this, because it was the moment I saw with my own eyes that the America I love was becoming a nation that steals refugee children from their parents,& caged them.

More kids died after this. To date, no one has been held accountable.

We need to save these kids. https://t.co/HhdMqc5zML

After the story of AOC’s salvaged photo op went viral, PolitiFact reached out to Ivan Pierre Aguirre, the photographer who took the photos in question.

“It isn’t a parking lot,” Aguirre said. “It’s the road leading to the camp.”

Well, this changes everything! She wasn’t crying like a spurned toddler begging for candy over a parking lot, it was a road.  This sheds so much light on the situation!

In a hilariously contrived effort to piece together the landscape of AOC’s surroundings in the photo that would put the Warren Commission to shame, Politifact attempted to map out the Tornillo detention facility’s entrance and salvage AOC’s integrity:

Daniel Borunda, a reporter for the El Paso Times who was at the rally on the same day, told PolitiFact that the tent complex was “visible in the distance several hundred yards away” from the fence.

“Several hundred yards away?” Four hundred? Five hundred? Nine hundred? We’re talking yards, not inches here, so unless AOC’s got the visual acuity of a hawk, I’m not buying it.

Ultimately, PolitiFact ruled that “Photographers at the scene who took photos of Ocasio-Cortez say she was not facing a parking lot. Rather she was just beyond the toll plaza for the Tornillo facility, and she standing on a road that led to the Tornillo tent complex, which was in the line of her gaze, as she stood at the fence. Pictures by other outlets also confirm the location.”

Folks, I know you’re here because you can’t stand Twitter (and I don’t blame you) but want to see how badly PolitiFact got roasted. Say no more, friends:

Where does that highway go to?

"She wasn't standing directly in the parking lot so, false" – @PolitiFact, losing all credibility. pic.twitter.com/xrgg39ixga

The memes never get old!

PolitiFiction back at it again with the Dem shilling 😂 #UnbiasedMyBlackAss

I’ll put a dollar in the swear jar for Mr. Felder on this one, ’cause he absolutely nailed it.

Jim pulled that last one from the vaults on this special occasion, and it’s totally appropriate.

Then, this two-word-and-a-photo response that hammers the final nail in the coffin over PolitiFact’s credibility, which spawned its own thread of hilarious responses:

So much for the facility being “in her line of gaze.”

Oh my word, I almost lost my coffee on that one!

PolitiFact’s editor, Angie Drobnic Holan stepped in to try to set the record straight which, of course, made things even worse:

Don't TL;DR this one. Our #factcheck does not describe the scene as just "an empty road." The road is part of a larger site that our fact-check fully documents. You can see an arial photograph of the site that shows way more than the 'empty parking lot' posts.