Political Cowboy battles Rosie O’Donnell on Twitter. See some of the private conversation 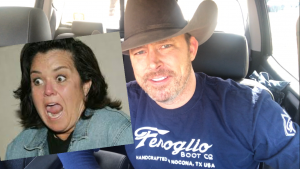 In case you missed it:

Yesterday I did one of my truck videos about Rosie O’Donnell’s offer to bribe Senators Susan Collins and Jeff Flake with $2 million each to vote against the tax cut bill. It has now been viewed one million times on Facebook and is not without its controversy. Same as every video I’ve ever done. Some folks can’t handle it, but that’s ok.

If you missed Rosie’s tweet that’s potentially a federal violation of 18 US code 201b here it is:

DM me susan
DM me jeff

no shit
2 million
cash
each

She’s obviously unhinged and has left the planet. In my video I mentioned Rosie being a celebrity that threatened to leave the US if Trump was elected president and that she had made a serious error with the federal crime of attempting to bribe senators. If you missed my video response you can see it below.

Many took offense to my useage of the phrase “Hugh Heifer.” They claim it’s a fat shaming phrase. It’s not. A heifer is a female cow that’s useless because she’s not producing calves. Rosie isn’t producing much these days either as is evidenced by the time she has on her hands to respond to my simple video. She’s been consumed with it publicly and privately. Check it out:

sad u r so handsome and so wrong

Free speech?!? Can you smell the condescension and crazy?

Rosie – bribing senators is not defended in the first amendment. Calling me cute is however. https://t.co/iMC8B1wlDJ

Rosie then decided to throw down the gauntlet. The condescension continued:

So Rosie decided to maintain her innocence regarding the moving from the US claims. Somehow thousands across the country must have dreamed that she made the threat. Note however that she says nothing about the bribery accusation. I decided to press her on the issue:

Didn’t say there was a video. It is a federal crime to offer a bribe to elected officials so as to influence their vote. True or False? https://t.co/DXd1oKOsXZ

was that a lie chad

You tweeted about it last spring. Did you not? Are thousands deluded? Many said they’d help you pack. Back to the bribery question. T or F? https://t.co/hBJbR32Yqb

Rosie maintained her innocence on threatening to leave but still not a peep on bribery.

jesus did not lie chad

At that point I put her in a corner from which she could not emerge. To answer my question would be to admit guilt to a federal offense.

She still has not answered. Her comments did however continue via Twitter DMs and they demonstrated true Trump Derangement Syndrome. I’ll let you take a look at a few screenshots below: 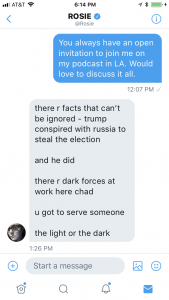 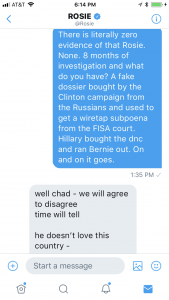 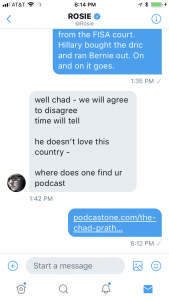 Maybe she will join me soon. If you aren’t listening to The Chad Prather Show you can subscribe by clicking here.