Be careful what you say.  The language police are listening.

There are few terms I despise more than “political correctness.” The phrase has evolved into something hideous. How many people are literally hiding behind that concept of political correctness rather than actively engaging the culture around them?  They are afraid of being offensive. People now live with the constant repercussions from the words they choose to use and the ideas they tend to espouse.

Why have words become so hurful? Many times in our current PC-sodden age it’s simply because the words are too descriptive or even misunderstood, and not harmful at all. Most of the time it’s because today’s world of cultural progressives have become mentally neutered and too easily offended.  The Sensitive Sally’s are everywhere.

Being perceived disrespectful or off-putting in today’s world has become a capital offense.  One wrong word and you’ll lose it all.

Those who tend to carry the banner and champion the cause of political correctness tend to be whiners wearing the self-appointed badge of the language police. They see the world as obnoxious and offensive and therefore feel the need to make it more neutral and easier to live in.  These self-proclaimed purveyors of social justice will sacrifice you on the altar of their faux tolerance. The language of political correctness has no meaning, and for them, that’s what’s so appealing. And whatever meaning remains has simply become relative.

Recall the instance from about 12 years ago when a legislator was forced to resign due to his use of the word “niggardly” in reference to a proposed budget.  The word actually means “stingy” but the ignorance of those who heard it determined he was derogatorily referencing someone’s race.  For him there was no going back.  The correctness police had determined him guilty regardless of facts.

We have all learned that when political correctness rules the day facts no longer matter; it’s all about feelings.

It’s at this point that we realize political correctness has actually been weaponized. We have actually replaced old prejudices with new ones.

Day in and day out I hear people tell me that they appreciate that I say the things they want to but can’t.  I often wondered why they can’t just say it themselves.  Why not shout your convictions from the mountaintops? Oh that’s right…political correctness.  It’s not that they no longer have free speech, it’s just that the consequences of speaking freely have become much more severe in light of our current delicate sensitivities.

To paraphrase Victor Davis Hanson, people have become more concerned with being politically right than being factually correct. That’s quite easy to do when you’ve done everything possible to destroy absolute truth, logic, and reasonable conclusions. It’s a form of verbal yoga that in the long run leaves all of us mentally stretched and bent out of shape.

Many so called “progressives” in seeking to enhance reality have only served to alter and distort it.  This is one of the primary reasons why we must pull our heads out of the proverbial sand and speak up.  Say what needs to be said and let the chips fall where they may.  I’m not suggesting an abandonment of compassion, but I do believe that sometimes the truth hurts.  Toughen up buttercup.

Long gone are the days of thinking through what you want to say and then saying what you think.  The age and skill of thinking critically has been jettisoned and exchanged for “niceness” and “inoffensiveness.” We can’t even describe another human being without being thought racist or at least prejudicial.  And to make matters worse, the rules keep changing.  Even the most thoughtful person can now be thought insensitive and mean if they didn’t get the latest PC update on acceptable terms and speech.

A few year ago there was an advertisement for a coffee shop’s hot chocolate that said it came with a “gender neutral marshmallow snow being and a candy cane.”  Mmmmm that sounds delicious.  “Hey kids want to go play in the snow and build a gender neutral snow being in the front yard? When we are finished we can come back inside and eat organic genderless gingerbread figures.” Give me a break! Get dressed kids we are making a snowman and eating cookies that look like a man!  Bite the heads off first…it’s what cultural progressives want anyway.  People without brains.

President Donald Trump has gone so far in his personal battle to fight political correctness that he’s often been willing to be seen as politically INcorrect in order to create a sense of chaos in the minds of his opponents and naysayers.  In many ways he’s become like a laser pointer for the mainstream media, liberals, and Never Trump cats to chase incessantly and futilely. It’s caused most of us in many cases to think of how nice it would be if Trump were more of a silent movie, where we see the actions, but don’t hear the words.  That, however, is not his plan in the least.  So far it’s been irritatingly effective. Be honest.  You know I’m right.

How many times do we hear avowed conservatives say they love Trump, but they just wish someone would take away his Twitter.  Therein demonstrates how much we’ve been overly emasculated by “word phobias” and indoctrinated by political correctness.  Rest easy my friend.  World War III won’t be started by a tweet.

With the economy breaking records almost daily, black and Hispanic unemployment at an all time low, more women appointed to senior administration positions than any other presidency in history, and America taking back it’s rightful place as a respected and feared leader on the global scene I for one say, “Tweet away Mr. President.”  Let the chips fall where they may and political correctness be damned.

Let’s face it, when it comes to politics, long gone are the days were you have to watch every word that you say. 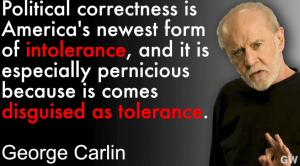