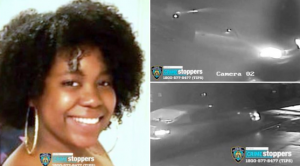 We started off 2019 with a bang with the Jussie Smollett hate crime hoax, now it looks as though we’re wrapping things up with a staged kidnapping in the Bronx.

According to The Daily Wire, 16-year-old Karol Sanchez is now being accused by the NYPD of staging her kidnapping by four men in the city.

“Sixteen-year-old Karol Sanchez and her mother, who are from Poughquag in Dutchess County, were in the city for a doctor’s appointment earlier Monday,” NBC New York reported. “They were walking to a train station on Jackson Avenue around 11:30 p.m. when four men in a tan four-door sedan pulled up, according to law enforcement sources and police. Two men got out, pulled Sanchez in and drove off.”

The story of Sanchez’ “kidnapping” shocked New York and the nation when street camera footage showed her apparent abductors ripping her away from her mother.

Seeking Immediate Information in regards to a kidnapping last night in the vicinity of Eagle Ave and E 156th St. 16 year old Karol Sanchez was walking with her mother when 4 men in a beige sedan forced her into their vehicle and fled the scene. Any info PLEASE 📞 1-800-577-TIPS pic.twitter.com/rgc8VWBgGv

After being heavily critiqued on social media for waiting hours to post an AMBER alert, the NYPD’s 40th Precinct was pleased to announce that they had achieved a victory in finding Sanchez safe and sound:

“WE HAVE A VICTORY TODAY !! Karol has been found !!! Thank you to all who have worked very hard to track down the people involved in this case !!!”

WE HAVE A VICTORY TODAY !! Karol has been found !!! Thank you to all who have worked very hard to track down the people involved in this case !!! pic.twitter.com/TYD7IlU49N

Children are kidnapped every single day in this country, and this would have been something worthy of celebration if not for one crucial detail: after being recovered by authorities, Sanchez confessed to staging the entire incident.

“Shortly after she was found on Tuesday afternoon, Karol was questioned by officers from the 40th Precinct, where she admitted to setting up the kidnapping and then was released to her family,” The New York Times reported. “During the interview, one police official said Karol described her mother as ‘overprotective.’”

According to the New York Post, Sanchez allegedly staged the kidnapping “so that she could be with her boyfriend, a 23-year-old reputed Crips gangbanger once arrested for murder.”

A modern-day Romeo and Juliet, I tell ya.

The NYPD is reportedly mulling over whether or not to file criminal charges against Sanchez and her “kidnappers.” Considering that Sanchez’s mother tried to save her daughter, resulting in them slamming her onto the ground—to say nothing of the emotional trauma she has just endured—I’d say charges are just the beginning.