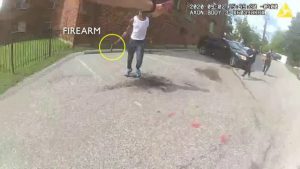 Washington, D.C. police have released video footage on Thursday that shows what happened during the officer-involved shooting that killed Deon Kay after protests started up in the city.

The footage clearly shows that Kay wielded a firearm during the encounter, which is what led to his death at the hands of local law enforcement.

Warning…the footage below is disturbing.

Investigators said police encountered Kay while pursuing reports of a man with a gun. They pointed out that the bodycam video showed Kay brandishing the gun shortly before an officer fired at him, striking him in the chest.

Most of the police shootings that have occurred in America have been justified, as the individual who ended up taking a bullet brandished a weapon and threatened the lives of police officers. A lot of this comes from noncompliance.

This is an inconvenient fact that liberals don’t want the people to know. Here’s to hoping cooler heads prevail and Washington doesn’t end up like Portland.