Police Chief Says Officer In Daunte Wright Shooting Meant To Use Taser, Says It Was ‘Accidental’ 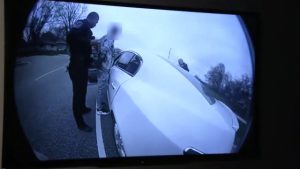 Local Minneapolis police chief said that the killing of a black man in a suburb of the city was an accident and not an act of malice or intentional excessive force.

Brooklyn Center Police Chief Tim Gannon stated that the officer who was responsible for shooting Daunte Wright, 20, meant to fire her Taser, but used her handgun instead. He then described the incident as an “accidental shooting.”

Bodycam footage of the incident was released and in it you can see a struggle kicking off between Wright and local law enforcement officers attempting to arrest him. Wright attempts to flee in his car and the officer can be seen yelling, “Taser! Taser!” before shooting him with a handgun.

“Holy s—. I shot him,” the officer can be heard saying before the video ends.

The officer responsible for the incident has been placed on administrative leave. The state has promised an investigation.

“We’re going to do everything we can to ensure that justice is done and our communities are made whole,” Brooklyn Center Mayor Mike Elliott said.

Gannon would not name the officer, but said she was “very senior in the department.” He did not directly answer a question about whether she would be fired from the force.

“I think we can watch the video and ascertain whether she will be returning,” he said.

Wright’s mom, Katie Wright, urged her community to remain calm in light of the situation.

“All the violence, if it keeps going, it’s only going to be about the violence. We need it to be about why my son got shot for no reason,” she said, speaking to a crowd near the location where her son was shot. “We need to make sure it’s about him and not about smashing police cars, because that’s not going to bring my son back.”

Okay, look, he didn’t get shot for “no reason.” The guy resisted arrest and attempted to flee. The situation was fine and under control until he took that action. He would still be alive right now had he not resisted. That much is clear.

That, however, does not excuse the actions of the officer who should have known which weapon was in her hand before she used it. This is some serious negligence on her part and some sort of disciplinary action is called for. Mistakes like this are egregious.