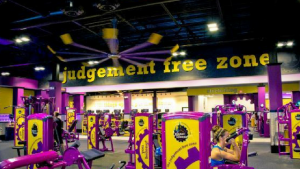 This, my friends, is what it looks like when tolerance comes back to bite you in the a$$.

Planet Fitness is a chain of gyms that prides itself on being a “no judgment zone” where trying too hard is discouraged, pizza parties are rampant, and men, of course, can use the women’s locker room.

Apparently, however, their refrain from judging their patrons ends where the desire to do yoga in the nude begins.

Why, I demand to know, is that the case? If a man can be a woman, why can one not be their true, naked-yoga-doin’ self in a Planet Fitness?

The notorious gym chain has gone as far as to terminate the membership of a woman who objected to sharing a locker room with a transgender woman (i.e. a man), but they themselves will not tolerate sharing their facilities with nudist yogis?

This is an outrage. As the yogi in question told the police who promptly showed up to arrest him (just a reminder as to how much we owe police officers for their courage and sacrifice), Planet Fitness is supposed to be a judgment-free zone!

USA Today has the story:

A Massachusetts man has been charged with stretching the spirit of the Planet Fitness “judgement free zone” slogan after allegedly stripping at the front desk of a gym and exercising in the nude.

Eric M. Stagno, 34, of Haverhill, Mass., was charged with indecent exposure, lewdness and disorderly conduct after police responded to the gym in nearby Plaistow, N.H., according to local media reports.

“The story we got from witnesses was that the guy walked in, stripped down right there in front, left the clothes and belongings at the front desk, walked back and forth across the gym a couple of times and then settled in over at the yoga mats,” Plaistow police Capt. Brett Morgan told the New Hampshire Union Leader newspaper.

Officers found Stagno in what appeared to be a “yoga-type pose,” Morgan said.

“The only comment he made was that he thought it was a judgment-free zone, apparently referencing their slogan,” Morgan added.