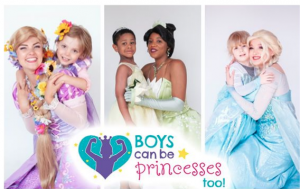 America has careened clear off the cliff of sanity. Stories like this are merely the “kersplat” heard on impact.

According to The Daily Wire, Chicago-based photographer Kitty Wolf has founded the “Boys Can Be Princesses, Too Project” in an effort to normalize cross-dressing for kids and to further the notion that gender is whatever the individual feels like at the moment.

So, the project is solely addressing the idea that boys should be able to participate in pretend play without those pesky gender norms. Uh huh, sure.

That’s why I have decided to produce a series of photos showing little boys dressed as their favorite princess, together WITH their favorite princess! I know there are little boys out there that love these fairy tale characters just as much as the little girls we meet doing princess parties. Our interactions with them have been, for whatever reasons, few and far between, but we see these boys, we know them, and we love them!

Therefore, our goal here is to show these boys and world that it is perfectly acceptable for boys to admire and even dress like princesses. I want to show them it’s ok for boys to dress up as their heroes, even if that means they’re twirling around in a ball gown. Overall, I want everyone to see it’s ok to be who you are and like what you like! No child should feel ashamed of the things that bring them joy.

The real motive behind Wolf’s project comes out in the section of the site aimed at those who wish to collaborate on the project:

So, folks are literally going to be prowling around, taking photos of boys in dresses, and parading them around for inclusivity’s sake.
Sounds like “Wolf” is an accurate name for this photographer. Keep your kids away from this mess, y’all.