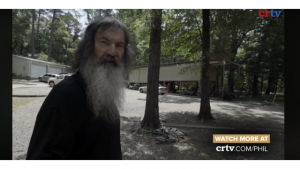 When Phil Robertson heard that the media was all in a tizzy over Trump’s reference to MS-13 as “animals” last week, he had a thing or two to say about the controversy.

And it was something that sorely needed to be said. Robertson can always be counted on for simple, common sense truth about the major issues of the day, which he, admirably, always seems far above.

In his CRTV show, In the Woods With Phil Robertson, he called out the media for being upset about the comment considering what the majority of Amerian academia teaches about human’s relationship to animals.

Take it away, Phil:

“All of your institutions of higher learning across America, every day in the classrooms of the elementary schools and high schools and colleges, they say with one voice, we are, biologically speaking, animals,” he says in the video.

“Saltwater made us, we’re all animals, we came from the apes and the chimpanzees. We’re all just animals, there’s no difference between us and the animal world,” he continues, explaining the way most people think about our origins.

“Why are you jumping up and down because Donald Trump agrees with you, when he refers to MS-13?” he asks. “I thought you said we’re just animals…you don’t believe there’s any difference between human beings, that there’s a spiritual side, there’s good there’s evil.”

He holds up his well-worn Bible, a staple on his show as he consistently ties most major political and cultural issues of the day back to the Word.

“This says we were created by God, we’re human beings. We are image bearers,” he explains, a theological concept which Nancy Pelosi, a staunch supporter of abortion, ironically referenced while criticizing Trump’s comments last week.

But just because someone bears the image of God does not mean they are incapable of extreme sin, as Robertson explains.

“But human beings can get so depraved…Trump was right,” he says. “They act like animals. Animals have no conscience, foxes kill ducks, foxes kill rabbits, they don’t feel bad about killing a rabbit.”

“We kill animals, we kill them and eat them,” the world-famous duck hunter and woodsman says.

“But we don’t feed on each other. When human beings start acting like animals, they do so because there is no God among them,” he explains.

“We’re just trying to get people to turn back to God and stop acting like animals,” he concludes.