#PeteButtigiegCalledMe Is Trending On Twitter. These Brilliant Folks Fixed It. 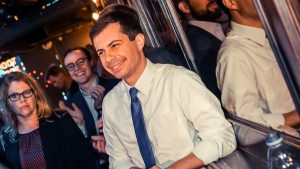 Pete Buttigieg had the honor of being called “a lying MF” in a recent article by The Root’s Michael Harriot for failing to say the exact magic words about racism in America. After taking the time to call Harriot to demonstrate his woke repentance, which resulted in another article, Buttigieg became a trending topic on Twitter.

The People of Twitter™, however, took the trending campaign in a markedly different direction.

The hashtag, co-opted by liberals and conservatives alike, yielded some fascinating and hilarious results.

#PeteButtigiegCalledMe and asked “is Michael Harriot a narcissist who would call Pete Buttigieg a “liar” for clicks, then squeeze a second article about Michael Harriot out of it, while never talking about Buttigieg’s actually bad, actually real record on racial issues?”

#PeteButtigiegCalledMe to mobilize my friends and family to vote against the neoliberalism he represents and to vote for a fair and just society under the #NotMeUs movement. #BernieSanders2020 pic.twitter.com/M8sXmUkXiu

#PeteButtigiegCalledMe So I looked at his track record on poor and people of color and it is abysmal. He is an elitist that views the poor as a problem. One example: SB had a program that mandated home repairs and those that could not afford the repairs lost their homes.

This needs to get more coverage. That donation ratio is appalling. #PeteButtigiegCalledMe https://t.co/QarY0R4UBM

#PeteButtigiegCalledMe to acknowledge this candidacy was a trope so he could raise his name recognition and go home and run for Governor of Indiana as he knew he wasn't ready #PeteForGovernor pic.twitter.com/ceeLp85Bmw

And, lastly, my favorite: