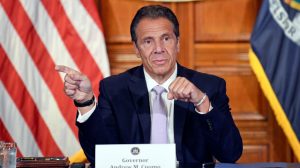 New York Gov. Andrew Cuomo “did what he had to do” by finally taking the steps to resign from office amid the flood of sexual harassment allegations as there was not a “chance for him to survive,” according to former Congressman Pete King.

The New York Republican sat down for a conversation on Newsmax’s “Wake Up America” program where he stated that he had fully expected Cuomo to “drag it out” for a few more months hoping that folks would lose interest in the story or so he would have a chance to get some information he could use against his accusers.

Cuomo is not leaving the office for two more weeks, leading to some speculation about his motives, but King said he would give the governor the benefit of the doubt and said the delay is likely so Lt. Gov. Kathy Hochul will have a bit of a transition period before taking office.

“Otherwise, you’re coming in cold in one of the largest states in the country, with enormous problems,” King went on to say. “To just come in cold would put the new governor at a tremendous disadvantage.”

Meanwhile, King said he does think Cuomo still has a future in politics, despite the sexual harassment and COVID-19 nursing home deaths scandal.

“If he basically does some good works over the next several years, if you see him at public events. if you see him working with various charities, all of this could seem to be very far in the rearview mirror,” said the congressman.

“Andrew Cuomo has enormous talent. He has a lot of charisma. Even his enemies have to admit that…you know, Richard Nixon, he was just down as anyone could be in 1974. Just a few years later, he was the main speaker…he had elected officials going over to meet with him in New Jersey. He advised and he wrote about five or six books. You can rehabilitate,” King concluded.

If by that King means the dude is really, really good at lying and acting like a stubborn mule, then yeah, I guess I’d have to agree. But that’s not really what is meant here, is it? Who knows with Pete King.

Still, not only should Cuomo be held accountable for sexual harassment, but it’s critical he also is punished in some form for the way he mishandled the COVID nursing home situation that led to the deaths of thousands of people.