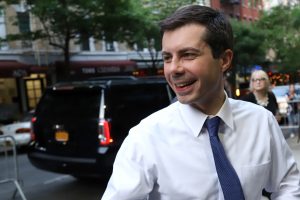 You know America has writhed its way pretty far into the pit when someone like Pete Buttigieg is considered a “moderate” Democratic candidate for the presidency. But, well, here we are.

Don’t get me wrong, the South Bend, Indiana mayor would still increase the size of government, support the dangerous Equality Act, and strip away any remaining protections unborn children still have under the law. He is, after all, a Democrat.

But the dude has made himself at least a little, tiny bit distinct from his bloodthirsty, draconian Dem opponents by, say, opposing dropout Beto’s “hell yes” plan to confiscate semiautomatic firearms (though he is still certainly no friend of the Second Amendment) or revoke the tax-exempt status of religious organizations who don’t affirm LGBT shenanigans.

Considering the steaming pile of radical leftism that is the 2020 Democrat roster, Buttigieg at least gives the appearance of being a sane person.

Too bad (he just shot his campaign all to hell with a hilariously botched attempt to pander to black Americans.

In response to an apparent failure to garner significant support among the nation’s black voters, due in part to his performance as mayor of South Bend, Buttigieg’s campaign released a policy outreach plan over the summer.

That was all fine and dandy until this happened: 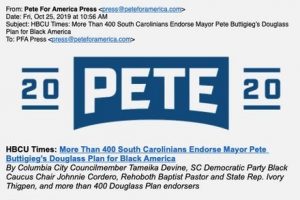 According to The Intercept, Team Buttigieg released the list in late October, linking to an article in the HBCU Times (Historically Black Colleges and Universities) that claims to be undersigned by over 400 Douglass Plan endorsers.

Here’s the thing, though:

-A lot of the people are confused because they didn’t endorse.

-They used stock photos from Kenya.

Yet we have heard nothing from his campaign.

According to The Intercept, two of the three black politicians cited by Buttigieg say they never endorsed the Douglass Plan, and that at least 40 percent of the other 400 individuals whose names are listed are actually white folks.

Even though I had had conversations with the [Buttigieg] campaign, it was clear to me, or at least I thought I made it clear to them, that I was a strong Bernie Sanders supporter—actually co-chair of the state, and I was not seeking to endorse their candidate or the plan. But what I had talked about was potentially giving them a quote of support in continuing the conversation, because I do think it’s a very important conversation.

“I had some difficulties with it,” Cordero said. … “The long and the short of it was they never sufficiently answered my questions, so I never actually endorsed the plan.”

The Intercept’s Ryan Grim points out that, rather than actually asking for endorsements, the campaign took them for granted and snuck-in a chance to opt out:

Buttigieg campaign says that people had a chance to opt out of endorsing and received this email before it went public: https://t.co/PidpTyGtMe pic.twitter.com/d8xdihTpMv

Yeah, pretty sure that’s not how endorsements are supposed to work.

And, on top of it all, the now-replaced stock photo:

On top of everything else, the Buttigieg campaign used a stock photo from Kenya to promote its Frederick Douglass Plan for Black America https://t.co/OqnGSIqCLS pic.twitter.com/qBqei71TdA

According to Slate, Buttigieg’s campaign is attempting to walk back the massive gaffe by saying they never claimed each of the 400 signatories are actually black people:

Our campaign is working to build a multi-racial coalition, and we sought and received input from numerous Black policy experts and advisers to create a comprehensive plan to dismantle systemic racism: the Douglass Plan. We asked a number of Black South Carolinians, as well as South Carolinians from many backgrounds, to support the Douglass Plan, and we are proud and grateful that hundreds agreed to do so.

In the HBCU Times op-ed and in communications with the press, we’ve been clear that not every supporter of the plan is Black, and have never claimed otherwise in any public communication. We never gave the impression publicly that these people were endorsing Pete, only that they supported the plan. After they indicated their support, we reached out to people multiple times giving them the opportunity to review the language of the op-ed and the option to opt-out. We did hear from people who weren’t comfortable being listed and we removed them.

Pete will continue to talk about the Douglass Plan wherever he goes, regardless of the audience, as there are many communities of Americans committed to eradicating racial inequity.

Rest in peace, Buttigieg’s shot at the presidency.