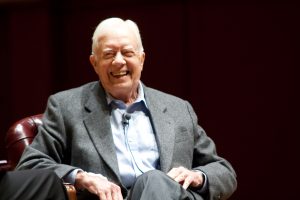 Say what you will about Jimmy Carter’s presidency, but the man is 94 peanut-pickin’ years old, for crying out loud. The fact that he’s even still vertical is cause for celebration.

After sustaining a broken hip and undergoing surgery, Jimmy is lucky to be alive and kicking. Falls and broken bones very frequently lead to more serious problems with the elderly, and with that in mind most folks are sending him well-wishes as he recovers from the procedure.

Of course, the spritely fella just had one thing to say about his hopes for recovery, according to a statement from The Carter Center:

“Carter said his main concern is that turkey season ends this week, and he has not reached his limit. He hopes the State of Georgia will allow him to rollover the unused limit to next year.”

Maybe you haven’t had the privilege of knowing a 90-plus-year-old man or woman who edges out most 20-year-olds in the tenacity department, but I sure have. They’re a rare breed, and statements like this just make me want to shake Mr. Carter’s hand.

Some folks, however, aren’t quite so balanced when it comes to what we should probably be focusing on when a human being sustains an injury like this and proceeds with what could be a risky period of recovery.

Namely, PETA, People for the Ethical Treatment of Animals (Who Don’t Typically Give A Damn About Humans).

According to the Washington Free Beacon, PETA president Ingrid Newkirk reached out to express the organization’s disappointment “that Mr. Carter—a Nobel Peace Prize laureate—spends some of his free time killing turkeys, who feel fear and pain just as he does.”

“PETA urges the former president to oppose speciesism, a human-supremacist worldview, and consider working to protect sentient beings, who simply want to be left in peace, rather than destroying them,” Newkirk added.

Yes, you read that right. A “human-supremacist” worldview. This is where radical veganism leads, folks. Hurry up and eat a cheeseburger before you wind up like this kook.

This isn’t the first time the most hypocritical animal rights group of all time has rebuked former President Carter over his hobbies.

Over a decade ago, Carter shared on Jay Leno’s Tonight Show about an incident in which he accidentally impaled his finger while baiting a fishhook.

Right on cue and with zero regard for the pain the human being in the scenario experienced, Newkirk urged Carter to quit fishing and “grant fish peace by leaving them in the water where they belong.”

Although there is an assorted handful of animal rights extremists out there who make PETA look like the NRA, the organization has extremist and asinine stances on hunting and fishing.

“Hunting might have been necessary for human survival in prehistoric times, but today most hunters stalk and kill animals merely for the thrill of it, not out of necessity,” PETA says. “This unnecessary, violent form of ‘entertainment’ rips animal families apart and leaves countless animals orphaned or badly injured when hunters miss their targets.”

I don’t know about y’all, but here’s hoping Jimmy has a fast and thorough recovery and that he can safely bag as many turkeys next year as his precious heart desires.