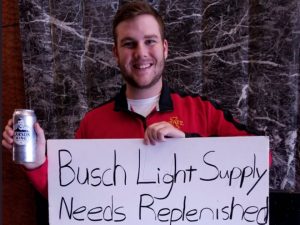 “Cancel culture” has claimed yet another victim, but this time, with a plot twist.

A couple of weeks ago, Carson King was just your average 24-year-old, into sports and out of beer money. Knowing full well that you can’t have one without the other, he hit up the ESPN “College GameDay” set during the Sept. 14 broadcast from Ames, Iowa with a handmade a sign that read “Busch Light supply needs replenishing” and a link to his Venmo account—which is hilariously brilliant, by the way.

The story could have ended there and it would’ve been a great one, King could have regaled his grandkids and great-grandkids with tales of that time he received over $36,000 in donations in just a few days, and how he decided to donate it to the University of Iowa Stead Family Children’s Hospital rather than blow it on hooch.

Heck, other companies even joined in, pitching in hundreds of thousands of dollars to donate to the hospital and bringing the total past $1 million—with Anheuser-Busch setting King up with free beer for a year.

Over 1.13 Million Dollars in total contributions for @UIchildrens after @BuschBeer and @venmo match! Do you think we can hit 2 Million by the end of the month? 🤔 #ForTheKids

The dude even had a flippin’ state holiday named for him.

But, then, cancel culture happened.

When the Des Moines Register chose to write a story about King’s selflessness, its reporter, Aaron Calvin, searched through the 24-year-old’s social media history and found two racist tweets referencing jokes from comedian Daniel Tosh’s Comedy Central program “Tosh.0.” The outlet told King what they had discovered and he thanked them for finding the tweets and deleted them, offering remorse for his old statements.

In spite of King’s eagerness to apologize and delete the tweets (which is a hell of a lot more than I would do), The Register went ahead with their smear story anyway. Hoping to get ahead of the Register’s big story, King held a news conference Tuesday night in Des Moines and addressed a “hurtful and embarrassing” tweet he said he made as a sophomore in high school eight years ago. He said he didn’t remember the post until a member of the media brought it to his attention.

“In re-reading it today, eight years later, I see it was an attempt at humor that was offensive and hurtful,” said King, who added that his tweet was a quote from the Comedy Central show “Tosh.o.” “I am so embarrassed and stunned to reflect on what I thought was funny when I was 16 years old. I want to sincerely apologize.”

So, just to recap, this kid with a heart of gold quoted a TV show on social media when he was a kid (and when we all had thicker skins), so now let’s banish him to Siberia and take away his free beer (which Anheuser-Busch decided to do). Seriously.

Now, the story could also have ended here, with King regaling his grandkids and great-grandkids of his shameful life of Comedy Central-inspired bigotry and cautioning them never to share anything on social media but cat videos and Vox articles.

But, here’s the plot twist.

Remember Aaron Calvin, the Register reporter who felt the need to go digging through nearly a decade of King’s tweets in search of some dirt for Lord knows what reason? In a moment of sheer frustration, a few of the nobler People of Twitter™ decided to dose up Calvin with his own medicine, and boy howdy did they not disappoint.

Meet Aaron Calvin, the hypocrite who has racist tweets from the same time as Carson King pic.twitter.com/kmUlvZXyN6

Since he wants to dig past social media posts, let’s do the same thing about him and all the offensive stuff this Des Moines Register editor Aaron Calvin has posted in the past pic.twitter.com/VEBiq7ShzK

And, then, of course, Calvin went ahead and did this:

Meanwhile, over at The Register headquarters…

The Register is aware of reports of inappropriate social media posts by one of our staffers, and an investigation has begun.

All the while, King has not sought to avenge himself, to join in the dogpile on Calvin, or to complain that he was so unfairly treated. Instead, in a statement to The Register, King says he’s just “happy that Busch and Venmo are both still contributing and we can continue to raise funds for families and kids at the hospital.”

What a freakin’ guy.

To date, The Register has yet to publicly comment beyond that on Calvin’s tweets or issue its own apology for having such insane double standards that manifested themselves in such an epically poetic way.

They did, however, cover the fact that, among several other companies, Geneseo Brewing Co. decided to stand with King and name a new Pilsner, “Iowa Legend,” after King. “The beer’s name is a nod to Busch Light’s now-canceled plan to inscribe beer cans with the words “Iowa Legend” alongside King’s face,” The Register reported. “Starting Thursday, Geneseo plans to donate $1 from every pint and 16-ounce can sold during King’s fundraiser.”

“We have witnessed your growth through your later social media content and accept your apology,” the brewery said in a Facebook post. “We believe that your selfless act to raise funds for the University of Iowa Stead Family Children’s Hospital is truly a noble act.”

I think the People of Twitter can sum up this epic saga far better than I can: “If you ever want to see the other side of “Iowa nice,” just mess with someone that helped raise $1,000,000 for a children’s hospital.”