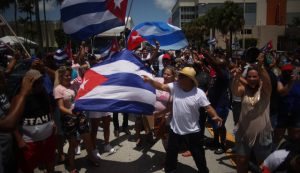 In the aftermath of anti-communism protests that have spread like wildfire across the nation of Cuba, government officials have started to detain and prosecute people who have participated in these events without providing them with due process.

All across the island nation, relatives are starting to line up at local police stations to try and locate their missing family members. Some of these folks are trying to deliver food, clothing, and other necessities to these individuals.

via The Wall Street Journal:

Cuban police have arrested an estimated 500 demonstrators and activists who were among thousands who poured into the streets on July 11 to protest against deteriorating living conditions, the lack of freedoms, and scarcity of basic goods and services including Covid-19 vaccines under the Communist regime.

Most of those detained during and after the demonstrations are young people from the poorest corners of the country who have been held incommunicado, relatives say. Authorities have yet to disclose the charges on which they are being held.

“Some demonstrators have been released, but those who are seen as influential or more visible aren’t going anywhere,” Danelis Iglesias, the wife of rapper Adrian “El Radikal” Zamora went on to say. Iglesias stated that her husband, who is known for producing music that is critical of communist regime that runs Cuba, was arrested just moments after he came out of the shower and was carried away while in shorts and flip flops.

“As The Daily Wire reported, Sen. Marco Rubio (R-FL) explained in a Tuesday speech that the release of political prisoners — along with the establishment of a free press and the advent of multiparty elections — will automatically end the embargo on Cuba, which is targeted at the regime rather than the Cuban people,” a report from the Daily Wire said.

“They don’t want individual Cubans to have a paycheck that they earn for themselves,” Rubio stated, speaking of the Cuban government. “They want what little you have to come from them — because if you don’t do what they tell you, they can take it from you. That’s what they want… They don’t want the people of Cuba to have liberty. This is all about control.”

“Anyone who stands up and says, ‘There’s an embargo, there’s a blockade by the United States, and it’s cruel, and it’s causing all of these problems’ is one of two things: They don’t know what they’re talking about and they’re just parroting some talking point, or they’re liars,” he added.

Let’s hope these folks are able to reunite with family and friends soon and that true liberty takes root in Cuba. The people there deserve it.