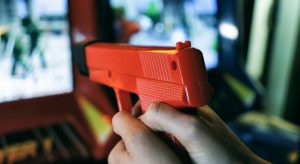 We’re seeing a resurgence in the very old claim that video games need to be banned because they can cause adults and kids alike to become violent, despite the fact there’s zero evidence to support such a statement.

Apparently people are trying to ban a new video game called “Six Days in Fallujah,” which was originally cancelled back in 2009 due to fears of it being released too soon after the real-life Second Battle of Fallujah which happened in 2004. It’s now been 12 years since the game was canceled and it seems like it might finally get released.

Well, until all of the woke activists who think they are game journalists got involved and started campaigning to get it canceled again, believing it will inspire mass shootings.

None of the people complaining or defending the game have played it, since it isn’t available yet, but that hasn’t stopped the commentary. Forbes senior contributor Erik Kain, who covers video games, described the game in his Susbstack column defending it as a game that, from what he could tell, “simply tries to recreate the chaos and terror US, British and Iraqi troops (and civilians) faced entering a deadly, hostile urban setting overrun by insurgents.”

“This is not Call Of Duty. It’s a slower-paced, tactical first-person shooter that uses procedurally-generated areas so that each time you enter the battle, you go in with uncertainty, not knowing what to expect, a mechanic that mimics the tension of a real urban warfare environment rather than the bombastic, frenzied levels of Call Of Duty,” Kain added.

Later, Kain wrote that game developer Highwire Games said “Six Days in Fallujah” was an attempt to recreate the 2004 battle, combining first-person-shooter gameplay with “documentary-style interviews that seek to portray both the feel of urban combat and the fear experienced by those present.”

“The usual suspects have come out of the woodwork to condemn the game as a “war crime game” and decry it as apologist propaganda for US foreign policy in the Middle East and elsewhere. People are talking about how it harms people of color, enables white nationalism and all the same tired nonsense that’s dragged out time and time again regardless of context or fact. Some have even said that commenting on the game could result in their US visa being revoked, as though the US government is eagerly watching Twitter to see if anyone says anything bad about the game,” Kain wrote.

Christopher Ferguson, a professor of psychology at Stetson University, addressed the whole “moral panic” behind this controversial video game over at Psychology Today, writing a piece that states the evidence available does not support the assertion that video games make people violent.

“The good news, and a reason to be cautious about stating such effects, is that evidence for other video game effects outside of the violence realm has generally turned up very little. That’s true whether we’re looking at body-image concerns, sexist attitudes, or pro-militaristic attitudes.  In general, beliefs that fictional media can influence behaviors or attitudes is largely exaggerated. Thus, even if the game were to portray a one-sided version of the Second Battle of Fallujah (something we don’t know since the game hasn’t been released) there’s no clear reason to believe it would have particularly noticeable effects on players’ attitudes toward Iraqi citizens,” the professor wrote.

There’s currently a petition on Change.Org that continues to insist, without providing a shred of actual evidence, that the game will “breed a new generation of mass shooters in America and brainwash gamers into thinking RACISM IS OK.”

At the time of the initial report on this story, the “mass shooters,” portion has been removed from the petition.

“The idea that this, or any game, is going to create “a new generation of mass shooters” is completely anti-science. At this point, the belief that video games and mass homicides have any relationship at all has been thoroughly discredited. This is the kind of line that was used by anti-game crusaders 20 years ago, and it’s almost surreal to see it resurrected here and signed onto by some game developers and journalists. It’s language like this that suggests we’re in a moral panic, not a careful consideration of the game,” Ferguson went on to say in his piece.

This is just one more attempt by liberals to try and shove their anti-gun nonsense down the throats of the average American citizen. Liberals only know how to use one tactic to get what they want, and that is fear.

Don’t give in to fear.