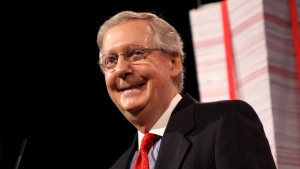 Top leaders from both the House and the Senate are apparently “optimistic” that a second aid package for Americans suffering economically from the impact of the coronavirus pandemic is close to being done.

The top four leaders in Congress had two meetings together on Tuesday and are scheduled to come together again on Wednesday, as they close in on a deal that would provide another round of federal aid to help relieve the burden on folks who have lost their jobs or their businesses due to the lockdowns taken to slow the spread of the coronavirus.

The virus aid package would provide roughly $900 billion and would include a new round of stimulus checks, a source familiar with the negotiations told the Washington Examiner.

The deal would also provide an additional four months of supplemental federal unemployment insurance at $300 per week and approximately $300 billion for small business loans.

It would also provide money for schools and day cares, rental assistance, and a temporary increase in food stamp benefits.

However, what the bill doesn’t include is direct aid for state, local, and tribal governments. This was a big part of what Democrats were wanting to include in the legislation.

As a result, the GOP were not allowed to include lawsuit liability language they originally wanted as part of the bill. These exclusions are the result of a bipartisan effort to come to some sort of agreement and get folks the help they need to stay afloat.

A source close to the negotiations has stated that the measures do include “other avenues” for helping state, local, and tribal governments.

Here’s to hoping they wrap negotiations soon so folks who are watching their livelihoods go swirly down the toilet get some much needed relief.

Oh, and uh, let’s hope the tyrants currently occupying many governor’s chairs across the country get a little sense and open things back up so we can get back to work.