Pelosi And Schumer Issue Response To Trump Speech About Border, Immediately Get Trolled 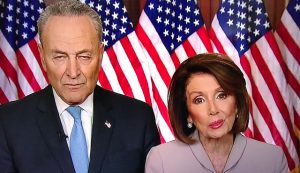 Right after President Trump’s speech about the southern border, Speaker of the House Nancy Pelosi and Senate Minority Leader Chuck Schumer gave a rebuttal so cringe-worthy in its optics that they immediately got trolled on social media for it.

This is what happens when you’re a couple of old, out of touch politicians who are more concerned with looking good to your base supporters so you can keep your job than you are for standing on principle.

In the age of social media, the substance of what people say is often eclipsed by optics, and on that front, President Trump won Tuesday night without so much as having to yawn. With Schumer’s hunched body hulking beside Nancy Pelosi’s uncomfortable stiffness, the odd-pairing echoed that of an illustration straight from the pages of Alvin Schwartz’s “Scary Stories To Tell In The Dark.”

Within minutes of the speech, trolls were already off to the races, their cuts swift and merciless:

They look like rich parents being told their loutish son just got kicked out of college again pic.twitter.com/49ZUXSHbyn

“You think you’re protecting yourself from Mexico, but when you build that wall, you’ll be locked in here. With us.” pic.twitter.com/lZGTgvIAgt

When The Mule is playing but it’s her turn to pick the movie and you know you’re sitting through The Favourite. pic.twitter.com/rXUhSz4AWT

Of course, the left immediately launched into spin mode, doing their best to try and make the image out to be some sort of display of solidarity against Trump:

Yeah, pretty sure that's not how Twitter used that image https://t.co/PqLlQ8bS7A

The real question is how much longer are Democratic voters going to allow themselves to be duped by these representatives of the establishment who only care about furthering their own careers and being lifetime welfare recipients?