Pelosi And Other House Dems Terrified By GOP Gun Carriers: ‘Enemy Is Within The House’ 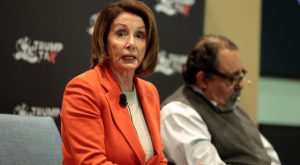 House Speaker Nancy Pelosi stated on Thursday that House Republicans are a direct threat to Democrats and pledged that additional money would be spent on federal funds to help improve security in the Capitol.

Pelosi stated that Congress must pass a supplemental spending bill to help provide money “for security for members, when the enemy is within the House of Representatives of a threat that members are concerned about, in addition to what is happening outside.”

So what does she mean by the “enemies within the House?”

Apparently Pelosi and her Democratic colleagues are scared of Republican members who carry guns. Speaker Pelosi has put in metal detectors at the doors of the House chamber, which did not sit well with GOP lawmakers.

Some Republican members carry licensed firearms around the Capitol. Guns are prohibited in the House chamber.

Pelosi said that the Jan. 6 attack on the U.S. Capitol by pro-Trump protesters has left the Democratic caucus fearful weeks later.

Democrats say they are fearful of their fellow Republican lawmakers as well. Partisan tensions have escalated in recent weeks, and the GOP conference includes new pro-Trump members, including Rep. Lauren Boebert of Colorado, who was determined to bring a gun into the chamber.

Democrats want to have additional money to protect them, including when they go back home to their districts and are flying or taking public transportation.

The Capitol still looks like a militarized zone with huge barbed wire fences and all sorts of National Guard troops walking around.

It’s quite ridiculous to be honest. This is them playing up their fear so they can justify taking the opportunity to limit the Second Amendment rights of their Republican colleagues.

Deplorable to the core.