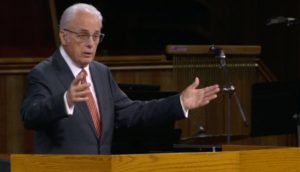 Pastor John MacArthur has been embroiled in a battle with the state of California for refusing to obey their mandates against holding indoor services, choosing to obey God rather than men, a choice that has led to his being threatened with hefty fines and even jail time.

Whoever thought we’d see something like this here in America? The country that prides itself on religious liberty has fallen victim to big government oppression all in the name of safety. Truly sad times for our republic.

Well, MacArthur has opted to fight back against this tyranny by not only defying ungodly orders, but by filing a lawsuit against the state for threatening him with the fines and jail time.

Here are the details from The Daily Wire:

In the complaint made public Thursday, lawyers for the church argue that state and county officials are violating six parts of the California State Constitution with their indefinite lockdown orders against houses of worship. They also contrast the treatment of churches with that of the protesters whose demonstrations roiled the state in the wake of George Floyd’s death.

Here’s a small sample of the complaint:

[Americans] have witnessed how the onerous restrictions imposed on them by public officials to allegedly fight the COVID-19 pandemic simply do not apply to certain, favored groups. When many went to the streets to engage in “political protests” against “racism” and “police brutality,” these protestors refused to comply with the pandemic restrictions. Instead of enforcing the public health orders, public officials were all too eager to grant a de facto exception for these favored protestors. […]

Having irreparably damaged the confidence of Americans – and Californians especially – who now realize that the pandemic restrictions are neither necessary nor good, on Sunday, July 26, 2020, Grace Community Church decided to resume worship services—joining millions of Americans in deciding that enough is enough. With deaths from the ‘COVID-19 suicide pandemic’ exceeding those from the actual coronavirus pandemic, Grace Community Church decided that it would no longer sit by and watch its congregants and their children suffer from an absence of religious worship and instruction. Perhaps unsurprisingly – perhaps not – this led the County of Los Angeles to submit a demand letter to Grace Community Church, ordering it to comply with the restrictions that Los Angeles County deems unnecessary to enforce against so many others. Grace Community Church does not intend to comply.

It’s a great thing to be in America where we have the means of fighting back against tyranny and where so many people still hold to the values our nation was founded upon. Without the liberty we currently enjoy, we’d be at the will and mercy of the government at all levels.

This is why it is critical to protect the Constitution and work toward shrinking the government and holding them accountable to our founding documents, especially since they are so critical to our nation’s future.